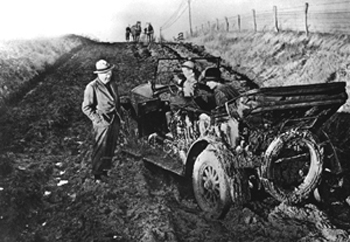 One of the key arguments of early "good roads" advocates was the need for improved farm-to-market roads. Their position was well stated by men such as Daniel A. Tompkins, a Charlotte cotton mill builder who maintained that building better roadways would not only save farmers on crop and fertilizer delivery costs but also increase church and school attendance and reduce the desire for farm youth to leave their rural homes. Tompkins wrote several pamphlets supporting this position between 1894 and 1909. Other North Carolina spokesmen for this position included state geologist Joseph A. Holmes and Governor Charles B. Aycock. As the Good Roads campaign spread, it began to focus more on long-distance motor highways built between major cities, and the farm-to-market advocates gradually gave way to their urban counterparts.

G. T. Winston, A Builder of the New South: Being the Story of the Life of Daniel Augustus Tompkins (1920).

"Prior to paved roads, pleasure excursions in the family car could end in disaster in North Carolina. Luckily for this mud-bound convertible and family, the approaching team of horses would pull them free from their prison."   Photograph. Image from the State Archives of North Carolina, N62.8.42. https://www.ncmuseumofhistory.org/story-north-carolina-new-ways-move-turn-20th-century (accessed September 26, 2012).