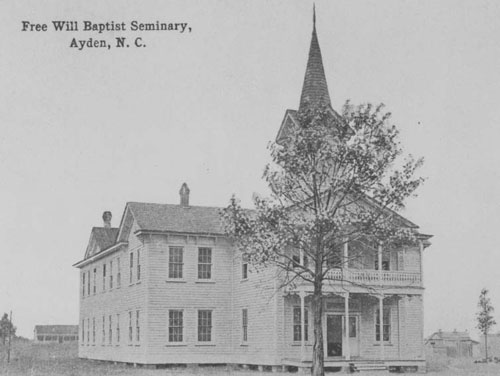 Eureka College was established by the North Carolina Free Will Baptists in 1898 as the Free Will Baptist Theological College in Pitt County. A building large enough to accommodate the school was erected on Lee Street in Ayden. The school enrolled pupils in a primary department and offered several curricula for students in the "higher branches"—including a theological department for the training of future ministers. The institution was coeducational from the beginning and educated hundreds of students between 1898 and 1925. In addition to the courses of study offered, there was an emphasis on spiritual and moral instruction and on character development.

By 1918 enrollment at the school was declining, in part because of the rapid growth of high schools in rural eastern North Carolina, which led to the establishment of a college curriculum by 1925. In 1926 the board gave a new name to the institution-Eureka College. Enrollment remained low, however, and continuing economic troubles caused it to close in 1931.