Additional information about the Eastern Wild Turkey is available at https://www.ncwildlife.org/Learning/Species/Birds/Wild-Turkey. 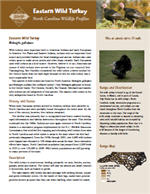 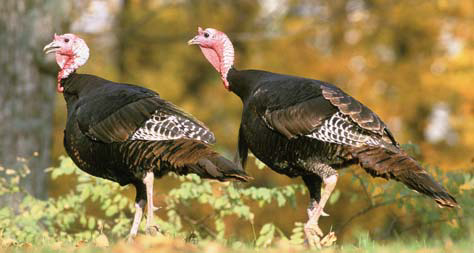 Wild turkeys lay eggs beginning in April. Average clutch size is about 8–15 eggs. Average of one clutch per year, but females will renest if the first clutch

fails. Young are sexually mature in one year.

Two years, although some birds have lived up to 10 years. 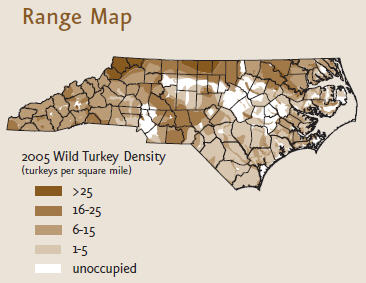 The wild turkey is found in 49 of the United States, in Mexico, and in parts of Canada. Only Alaska has no wild turkeys. North Carolina’s turkey restoration program was a monumental success, and turkeys are now found throughout North Carolina from the mountains to the coast. The range of the wild turkey continues to expand as remaining areas with suitable habitat are occupied by dispersing turkey populations. Note that it is illegal to release pen-raised turkeys in the wild because of the danger of introducing diseases to healthy wild birds.

When early European settlers arrived in America turkeys were plentiful in North Carolina and were probably found throughout the entire state. By the turn of the century, however, few turkeys remained.

The decline was primarily due to unregulated and heavy market hunting, rapid deforestation and habitat destruction throughout the state. This decline continued into the 1960s. Turkeys are once again common in North Carolina, thanks to a restoration program implemented by the N.C. Wildlife Resources Commission that involved live-trapping and relocating wild turkeys from sites in North Carolina and other states to areas in the state where the bird had previously disappeared. From the 1950s through 2005, over 6,000 wild turkeys were trapped and relocated to 358 release sites across the state. Since restoration efforts have begun, North Carolina’s population has jumped from 2,000 birds in 1970 to over 150,000 in 2009. Wild turkey populations are still growing in many portions of the state. 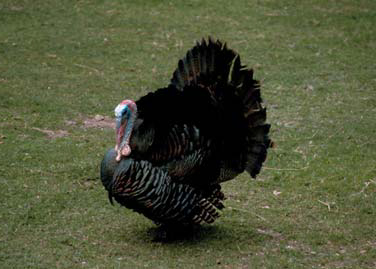 The wild turkey is omnivorous, feeding primarily on nuts, berries, acorns, grasses, seeds and insects. The turkey will also eat almost any small creature it encounters, such as lizards or grubs.

The male eastern wild turkey has dark plumage with striking bronze, copper and green iridescent colors. On the inside of their legs, males have pointed growths known as spurs that they use when battling other males for mates. Males  also have a growth of bristle-like feathers known as the “beard” that extends from the chest. It is not uncommon, however, to find females with a beard. The head and neck of adult males is largely bare and varies in color from red to blue to white, depending on the bird’s mood. Females are usually duller in color than males, which help camouflage them while they are nesting. Turkeys primarily rely on their eyesight and hearing for protection from predators. Their excellent eyesight is their best defense during the daytime, but they don’t see well at night. As with most birds, turkeys have little or no sense of smell. Turkeys are highly mobile and can run up to 25 mph and fly up to 55 mph. 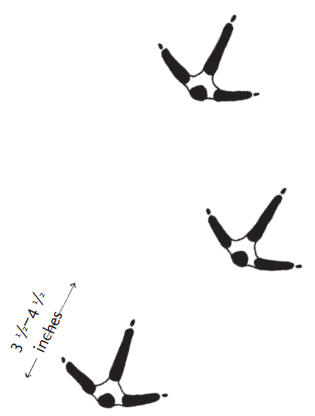 The eastern wild turkey thrives best in areas with a mix of forested and open land habitats. Forested areas are used for cover, foraging, and for roosting in trees at night. Open land areas are used for foraging, mating, and brood rearing. Turkeys nest on the ground with clutches of 10-14 eggs being laid from mid-April through mid-May in North Carolina. Turkeys are very vocal birds, and they communicate by means of a variety of calls. During the spring mating season, gobblers use their booming gobble to attract hens.

The wild turkey remains a favorite game animal for recreational hunters. Its meat is quite lean and delicious, though sometimes tough in older birds. Although commercial and unregulated hunting were problems in the past, hunters were the main group that helped restore turkey populations by funding restocking and relocating programs and by contributing to groups that conserve habitat such as the National Wild Turkey Federation.

A wild turkey brood survey is conducted each summer to gain insight into wild turkey productivity across the state and to evaluate gobbler harvest levels from the previous spring hunting  season. Participants in the survey primarily consist of N. C. Wildlife Resources Commission employees and avid hunters. Participation in the survey simply involves keeping track of wild turkey observations during the course of routine, daily activities from July 1 through August 31. In you are a licensed hunter and would like to participate in the summer turkey brood survey, submit the WRC # from your hunting license and your name, mailing address and date of birth to:

Hewitt, O.H., ed. The Wild Turkey and its Management (The Wildlife Society, 1967)

Produced by the Division of Conservation Education, Cay Cross–Editor

Today Feb. 10,2021 I saw a large turkey in my woods in Union County NC. It was unfazed by a large group of deer in the woods with it. So delighted to see this for first time in 12 years. Could there be more ? Aren’t they usually in a group?

From winter until late spring

From winter until late spring I had a flock of wild turkeys on my property in Fairview. 4 Toms and 5 hens. I wish I could share a picture of them that I took one day, with you. And I named them; Major Tom, Mstr. Sgt. Tom, Pvt. Tom & Airman 1st Cls. Tom. And the ladies were Mstr. Sgt. Henrietta (she was the all gray one, my understanding is she is/was a genetic throwback) , 1st Sgt. Patty, Staff Sgt. Maxine, Corp. Laverne & Pvt. Shirley . They would stop by the house every day. I miss them.

Thank you for visiting NCpedia and sharing your story. I hope the flock visits again.

I've lived in Granite Quarry, NC for almost 15 years and every year I see and hear wild turkeys on my property. I usually see a rafter of turkeys but today it was a lone Tom in a stare down with my cat.

Came across this site and

Came across this site and wanted to see how the turkey population is in central nc, specifically Franklin County, Wake County. We live very close to the county line and have captured via trail cam a Tom and a Hen. The Hen flew across our farm a few days before she was captured on camera. Been here 23 years and had never seen one before. We hear the tom gobbling from time to time on the back of our property:)

For the first time in the 30

For the first time in the 30 years we have lived on family farm land we have wild turkeys in the field behind us. One male, at first one femaile, then two, tonight four or five females. There are also babies, clutch. So exciting!

A trail camera I had placed

A trail camera I had placed near the edge of the woods got pictures of about nine birds foraging around a clearing in North eastern Cumberland county.

Yesterday(07/10/14), while traveling I-85 around Lexington,NC,
I saw a full grown hen grazing right up next to the break down
lane. It did not seem fazed by the traffic as it was going about
its own business.

Hi - just saw the comment on your site about participating in the annual turkey brood count. Wanted to share that I saw a BIG tom today around Noon just off of Squire Davis Rd / Sandy Ridge Rd, Guilford County, NC. Your distribution map says that this area is "unoccupied" however this is the second time this year we've seen turkeys in this same area. Hopefully they're moving in! They are beautiful birds!