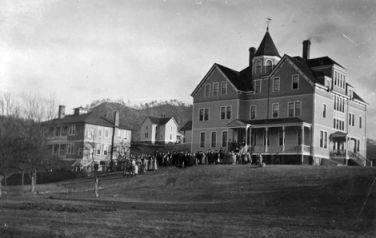 The Dorland-Bell School was established in Hot Springs (Madison County) in 1887 under the auspices of the Presbyterian Church. Called at first the Mission School at Hot Springs, the rapidly growing institution was named Dorland Institute in 1893, then in 1918 renamed the Dorland-Bell School following consolidation with Bell Institute. The school was founded by Luke Dorland and his wife, who had retired to the mountain health resort of Hot Springs after a lifetime of Presbyterian mission work. Located six miles from the Tennessee border, the school primarily drew students from North Carolina and the neighboring states of Kentucky, South Carolina, Tennessee, Virginia, and West Virginia. Students ranged in age from 5 to 28, with annual enrollment numbering 100 to 200 annually. Although for its first 40 years, Dorland offered no grade higher than eighth, its graduates were considered exceptionally trained and were certified to teach in most schools.

Maintaining dormitories for both girls and boys, Dorland-Bell was the only coeducational boarding school in the Presbyterians' southern Appalachian network. A large farmstead two miles from the school campus in town was home to more than 50 boys who walked the distance twice daily, regardless of the weather, carrying their books and meager lunches. Surrounding the Boys' Home were 600 acres of fertile river bottom, pasture, and forest. Named the "Willows," the farm became a demonstration model, using its own resources to make substantial improvements-including treating the acid soil with lime and constructing a silo, the first in the region. Another Dorland-Bell innovation, the "practice cottage system," offered girls six weeks of domestic science training as they took turns running a household. The school became known as the pioneer in this teaching method.

In addition to the farmstead's dozen or more buildings, the 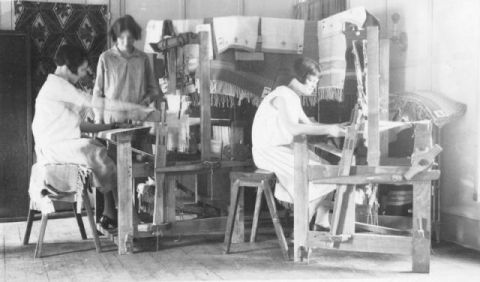 campus on Bridge Street in town covered a large block of property, supporting a dormitory, a classroom building, a hospital, and seven other buildings, as well as the church. Under supervision, the boarding pupils performed all the work of school and farm. Bible study and church attendance were mandatory, as were uniforms and weekly letters to parents.

The school's identity further changed in 1926 when the New York mission board closed the boys' department. By 1932 grades had been added for high school accreditation, only to be moved a decade later to Asheville Farm School at Swannanoa (a merger that led to what became Warren Wilson College).

Jacqueline Burgin Painter, The Season of Dorland-Bell: History of an Appalachian Mission School (1996).