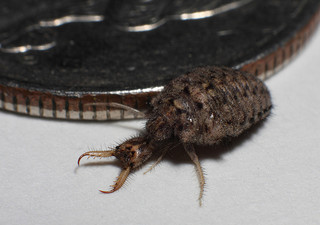 Doodlebugs, or ant lions, belong to the order of insects Neuroptera and are found in many parts of the world, including much of North Carolina. They came to be called doodlebugs about 1866. The winged adult has been described as graceful and elegant. The insect lays its eggs in dry sand in sheltered places, such as under the edge of a building, a cliff, or a road embankment. The larvae, requiring as long as three years to attain maturity, construct pits two to three inches in diameter in the sand or dry dust and dirt. The pits resemble funnels or inverted cones, into which ants fall. Concealed in the bottom, the larvae use caliper-like pincers to grab an invading ant. Injected with a digestive enzyme, the ant is then sucked dry.

Doodlebugs have also played a role in North Carolina folk history. They are often "called up" by children, who use a straw or pine needle to stir the pit in imitation of an ant struggling to escape. Children traditionally sing a ditty such as "Doodlebug, doodlebug, your house is on fire," or, "Doodlebug, doodlebug, come get your bread and butter," while attempting to catch the insect. When the doodlebug reveals itself it may be lifted out of its hiding place and held in the palm of the hand. Since it moves backward better than forward, it often backs off the hand quickly and falls to the ground.