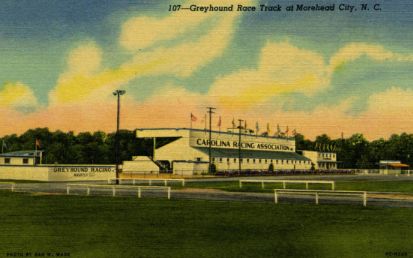 Dog racing and the pari-mutuel betting that came along with it had a short life in North Carolina, extending only from the late 1940s to the mid-1950s. In the period of rapid growth after World War II, promoters of tourism in coastal counties saw dog racing as a means of attracting more visitors to resort communities while providing a new source of money to supplement the property tax. Following passage of the necessary legislation by the General Assembly, two dog tracks were built, one in Carteret County at Morehead City and the other in Currituck County just south of the border between Virginia and North Carolina.

Opposition to dog racing, fragmented at first, became increasingly organized once the tracks were actually in operation. After little more than a trial run, the General Assembly repealed the law authorizing pari-mutuel betting, dog racing was discontinued, and the two tracks were closed.

Do you know what year the

Do you know what year the Cavalier Kennel Club moved its operations from Virginia to North Carolina?

My grandfather ran this track

My grandfather ran this track. I would love to know if anyone has any information about that

My grandfather ran this track

My grandfather ran this track. I would love to know if anyone has any information about that

To whom it may concern I'm

To whom it may concern I'm interested in enrolling my pet dog into dog racing. Could I please have more information concerning enrollment and the location thank you.

Thanks for visiting NCpedia and taking time to post your question.

NCpedia is an online encyclopedia about North Carolina and unfortunately, we are not able to help you directly with that question.  You may want to search the internet or visit your local public library for resources and search assistance.