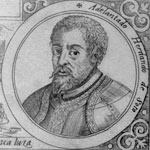 Hernando De Soto traveled through the region that would become the southeastern United States from 1539 to 1543 with an army of more than 600 men in an attempt to discover riches comparable to those found in Mexico and Peru. Highly ambitious, De Soto had been granted the right to oversee the conquest of La Florida (the name given to peninsular Florida and the land between the Gulf and Atlantic Coasts) for the Spanish Crown. Although he traveled almost 4,000 miles and found many bountiful lands, he discovered no gold or silver and very few gems. During his passage, he wreaked havoc on the indigenous chiefdoms of southeastern Indians. Relying on Indian guides and commandeering all available food supplies, he and his army practiced what was in some cases a "scorched-earth" policy. He died on the banks of the Mississippi River on 21 May 1542. The remnants of his army (just over 300 men) ultimately fled La Florida and sailed from the mouth of the Mississippi along the Gulf Coast until they reached Spanish settlements in Mexico. 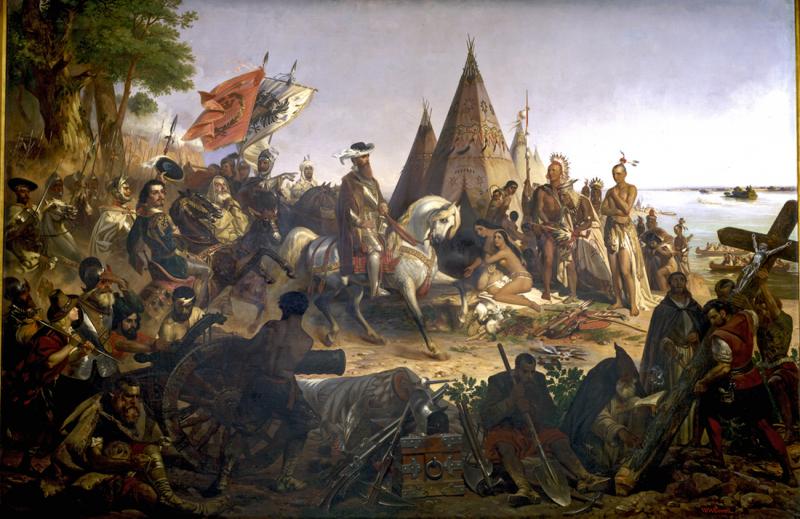 The actual route that De Soto followed through the Southeast has been the source of much scholarly inquiry. In 1935 the U.S. Congress authorized a comprehensive study of the De Soto expedition to identify and mark his route. The U.S. De Soto Expedition Commission, led by ethnologist John Swanton, published its findings in 1939. According to the commission's report, De Soto's army entered the far western part of present-day North Carolina and passed through what would become Macon, Clay, and Cherokee Counties. More recent research by Charles Hudson and his colleagues suggests a somewhat different route that includes a larger area of western North Carolina. According to this research, De Soto and his army reached the Chiefdom of Cofitachequi, located in the vicinity of present-day Camden, S.C.

De Soto, taking an Indian woman known as the Lady of Cofitachequi as a hostage, departed Cofitachequi on 12 May 1540. His force traveled north following the Wateree/Catawba River Valley. Within two days they encountered villages referred to as being in the territory of Chalaque. This region, described as unimpressive with little corn available, is thought to have been just southwest of Charlotte. Continuing north, De Soto and his men reached the town of Guaquili, possibly in the vicinity of Hickory. From Guaquili, they headed west and arrived at Xuala or Joara, thought to be the principal town of the Chiefdom of Joara. Archaeological evidence suggests that this town was located just north of Morganton. After two days at Joara, the army marched north into the Blue Ridge. Perhaps following the Toe River, they reached the Nolichucky River and the town of Guasili on 30 May 1540. Guasili may have been located near present-day Embreeville, Tenn.

It is believed that De Soto met with ancestors of both Catawba and Cherokee Indians as he crossed through western North Carolina. His journey is significant to historians, anthropologists, and archaeologists for the written accounts that provide the first historical glimpses of the often large and complex chiefdom societies of southeastern Indians.