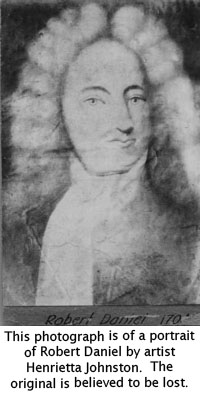 The brief tenure of Robert Daniel (1646-1718) as North Carolina governor was marked with tension between Anglicans and non-Anglicans and between Indians and colonists. The tensions eventually erupted into religious rebellion and open warfare with Indians following Daniel’s governorship. Daniel lived in Barbados and came to South Carolina in 1677 where he had acquired land and settled in 1679. He married twice and was the father of five children. As a landgrave (a member of the Carolina nobility), Daniel acquired over 31,000 acres of land, but sold most of it. By his death, he owned 1,519 acres in North and South Carolina and five town lots.

Daniel was active in political affairs of South Carolina, being a leader in the faction called the “Goose Creek Men.” He supported Seth Sothel, who removed Governor James Colleton from office, and created problems for Governor Phillip Ludwell. In 1697 the Lords Proprietors had Daniel’s assistance in London in drafting a revised version of the Fundamental Constitutions. He returned to South Carolina with the revised document and with an appointment from proprietor Lord William Craven as his representative. On the South Carolina council, Daniel, a diehard Church of England supporter, mounted an effort to prevent a “dissenter” (non-Anglican) from being chosen as acting governor in 1700.

In 1703, Provincial Governor Nathaniel Johnson appointed Daniel as deputy governor of North Carolina. In that year, relations between colonists and Indian were becoming strained. Daniel received petitions from colonists telling about raids. The colonists sought “speedy Redres” and defense, so they did not have to “live in such dayly Jeapordy of our lives.” To defuse growing tensions, some colonists of Bath County asked Daniel and his council to send an interpreter and to appoint envoys to negotiate with the Indians. Daniel called for the raising a militia regiment to respond to threats and tried to alleviate tensions by convening a meeting of the Governor and Council and “all the Indian Kings and Rulers in which “they agreed upon a firm Peace.” However the peace proved to be elusive.

Daniel’s greatest challenge came with his efforts to curb the power of religious dissenters (mainly Quakers) and bolster the Church of England in North Carolina. The governor placed Anglicans in the government and on his council. To get the Church of England established, Daniel had to remove dissenters from an assembly dominated by them. In 1704, Daniel received the instrument he needed to remove dissenters from the assembly, a requirement that public officials to swear an oath of allegiance to Queen Anne. Since the Quakers’ faith forbade them from taking an oath, they were effectively barred from public office. A simple affirmation, as Quakers earlier expounded to hold office, was not allowed. With no Quakers, the assembly soon after enacted a law that required support of the Church of England.

After leaving the governorship, Daniel remained active in North Carolina but, by 1709, had made South Carolina his permanent home after giving his North Carolina property to his wife Martha. In spring 1716, Daniel was appointed deputy governor of South Carolina, but he was out of office by the fall 1717 after a tumultuous tenure. He died in May 1718.

Hewatt, Alexander. 1971. An historical account of the rise and progress of the colonies of South Carolina and Georgia. South Carolina heritage series, no. 7-8. Spartanburg, S.C.: Reprint Co.

Salley, A. S. 1916. Commissions and instructions from the lords proprietors of Carolina to public officials of South Carolina 1685-1715. Columbia, S. C.: Printed for the Historical Commission of South Carolina by the State Co. https://digital.library.pitt.edu/islandora/object/pitt%3A31735054853134.

Note: Robert Daniel's surname is sometimes spelled as "Daniell," and Daniel(l) himself signed it this way.

Have been reading about

Have been reading about Robert Daniel. I understand He would be my Grand Father back about 6 generation.It would be interesting to hear from some of the Daniel family who still lived in North or South Carolina.

The last name is spelled with

The last name is spelled with 2 ll-Daniell. I have his seal and his signature to prove this.

Hello. Thank you for your

Hello. Thank you for your note regarding the spelling of Robert Daniel(l)'s name. Orthography was inconsistent in the early 18th century, even for names. You are correct that he signed his name with two l's. While in some instances, this spelling is retained today, in other authoritative instances, his last name has been "normalized" to account for the ubiquitous variety of spelling in this period. I will add a note below the article to acknowledge this variation.