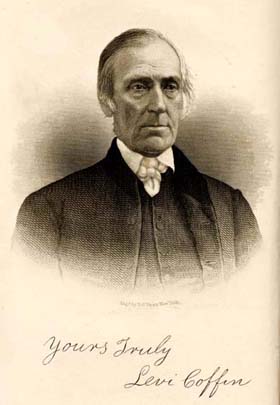 By some estimates, during the first half of the 1800s, roughly a third of North Carolina's residents moved to other states. The third-most populous state in the Union in 1790, North Carolina by 1860 had dropped to twelfth. Many of the immigrants were whites moving to Tennessee, western Georgia, Alabama, and other points farther west in search of less worn-out farmland and better opportunities. Some families left in the early 1800s because of the state's general backwardness, including its lack of attention to education, agricultural reform, and internal improvements, such as roads.

Another group of people moving out during the years before the Civil War were Quakers—members of the Religious Society of Friends, a spiritual movement founded in England in the 1600s by people dissatisfied with the existing sects of Christianity. Many Quakers left southern states for states such as Indiana, Iowa, and Illinois because of their opposition to slavery. Levi Coffin (1798–1877) is one example. His father's family had emigrated from England in 1773 and was part of the large group of Quakers based at New Garden in Guilford County; his mother's family had moved to the area a generation earlier from Wales, after a stop in Maryland. Coffin later wrote that both his parents and grandparents clearly opposed slavery. In 1826 Coffin, who had married in 1824, moved to Indiana. He later wrote:

The laws relating to slavery were constantly made more oppressive. A law was finally passed prohibiting slaves who had been set free by their masters from remaining in the State, except in exceptional cases, where they had been manumitted for meritorious conduct. Slavery and Quakerism could not prosper together, and many of the Friends from New Garden and other settlements moved to the West. . . . . In the early part of the ninth month, 1826, we took a final leave of North Carolina. My parents had emigrated to Indiana the previous year, and I was the last of our family to go. My family at this time consisted of myself, my wife [Catharine], and our son Jesse, about a year old. My wife's parents were not then prepared to move, but followed the next year. On our way to Indiana we had the company of my wife's cousin, Elias Jessup, and his little family. We made the journey in light wagons, with good teams, and had a pleasant trip. We took the shortest route, called the Kanawha road, and arrived at our destination in four weeks from the time of starting. We located at Newport, Wayne County, Indiana. –Quoted passage from Reminiscences of Levi Coffin, The Reputed President of the Underground

Coffin is sometimes called the "president" of the Underground Railroad, a secretive interstate network of "stations" of abolitionists helping slaves escape; southern Indiana and Ohio were key parts of this network of hiding places since they were relatively close to southern states allowing slavery. Coffin's longtime home in Indiana is a National Historic Landmark. During the twenty years they lived there, he and his wife are estimated to have helped more than two thousand slaves reach safety; they aided more after moving to Ohio.