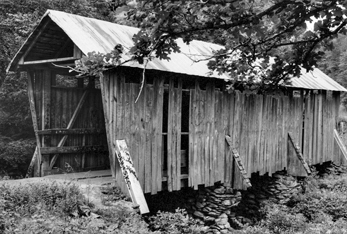 In the low, flat, marshy eastern region of North Carolina, mill dams at water-powered mill ponds became bridges facilitating travel across these wet areas. Traveling through these mill houses was much quicker than following alternate routes, which were often many miles longer. Bridge building at county expense did not begin until 1756; prior to that time, the mill pond owners had borne the cost. Coverings for these bridges were initially built to protect vital machinery and facilitate the unloading of grain in bad weather, making possible the loading of meal and flour as a finished product. In the late 1700s and early 1800s coverings were also adopted to preserve the bridges' timber, planking, and rails (which were vulnerable to rot) as well as their adjacent structures. "Kissing Bridges," as covered bridges have sometimes been called, were once desirable spots for young couples, who could steal a kiss inside the dark, protective walls of the bridge houses.

By the early 2000s, only a small number of covered bridges remained in North Carolina, three of which were located in the east in Bertie County. Hoggard's Mill pond north of Windsor had a gristmill covered bridge and a sawmill covered bridge, both authorized by the County Court in 1736; the Rascoe Mill covered bridge was authorized much later and encompasses a gristmill. Covered bridges in western North Carolina were not mill-related but simply bridges with covering to provide shelter. Two of these-located on Lyle Creek east of Claremont and at Lake Lure in Rutherford County-remained standing; a third bridge, crossing the West Fork Little River south of Asheboro, was washed away by flood in the summer of 2003.