The World Needs to Hear Her Voice 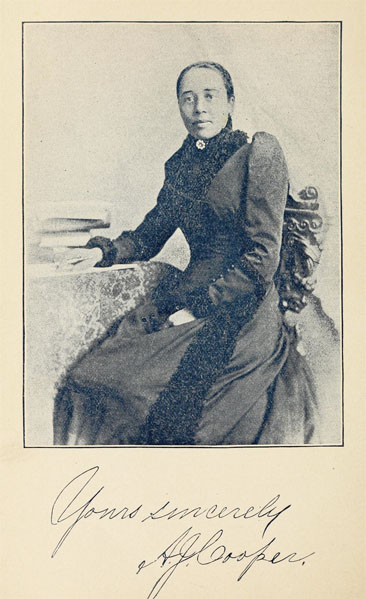 Would you like to travel to a foreign country? If so, you may know that you need a passport to travel to different countries. The passport is a dark blue booklet that proves a traveler is a U.S. citizen. It includes patriotic images and quotations from important people in U.S. history.

The U.S. passport includes a quote from Dr. Anna Julia Cooper. And she is the only African American woman whose words appear in the passport. She was born Anna Julia Haywood in Raleigh in 1858, seven years before slavery ended. Her mother was an enslaved servant in the home of Fabius Haywood, a doctor in Raleigh. Cooper became a respected author, educator, and activist. And these are her words that appear in the U.S. passport:

“The cause of freedom is not the case of a race or a sect or a party or a class – it is the cause of humankind, the very birthright of humanity.”

-Anna Julia Cooper, A Voice from the South

Dr. Cooper was the youngest of Hannah Stanley Haywood’s three children. Her academic success began at St. Augustine’s Normal School in Raleigh in 1868. Normal school was like today's high school. She received a scholarship and also tutored her classmates to help cover the cost to attend. She graduated from St. Augustine's and then attended Oberlin College in Ohio. She studied mathematics at Oberlin and graduated with a bachelor's degree in 1884. And then she earned a master's degree in mathematics there too.

Anna Cooper faced discrimination in her life because her skin was black and because she was a woman. But she worked hard to overcome them. At age 66 in 1924, she earned a doctoral degree from the University of Paris. At the time she was only the fourth African American woman to earn that distinction. Anna Julia Cooper faced fierce discrimination from her earliest days as a student. This motivated her to fight for both racial and gender justice.

Cooper moved to Washington D.C. in 1887. She taught high school and college, and she participated in the Black women’s club movement. In her teaching and writing she advocated for full equality for all people. Her book, A Voice from the South, discusses women’s rights and racial equality. Dr. Cooper died in her sleep in Washington at the age of 105. Her funeral was held in Raleigh, where she was buried. In 2010, the State of North Carolina erected a historical marker near her grave site.

Anna J. Cooper, A Voice from the South, as it appears at https://docsouth.unc.edu/church/cooper/menu.html

Cooper, Anna Julia. A Voice from the South: By a Black Woman of the South (Xenia, Ohio: The Aldine Printing House, 1892).