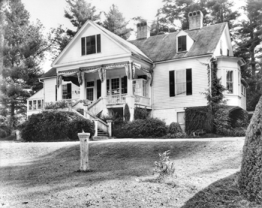 Connemara, located in Flat Rock, was the last home of famed poet and historian Carl Sandburg. Christopher Gustavus Memminger of Charleston, S.C., former Confederate secretary of the treasury, built the property as a summer house in 1838. Memminger called the property Rock Hill, but a later owner, Capt. Ellison Smythe, renamed it Connemara. Sandburg bought the property in 1945, seeking peace and solitude for his writing as well as a place for his wife Lilian to raise champion dairy goats. He wrote almost one-third of his works during his 22 years at Connemara. On 17 Oct. 1968, Congress established Connemara as the Carl Sandburg Home National Historic Site to be administered by the National Park Service. The historic site consists of the antebellum house, a dairy goat barn complex and a representative goat herd, sheds, rolling pastures, mountainside woods, walking/hiking trails, two small lakes, ponds, flower and vegetable gardens, and an orchard.