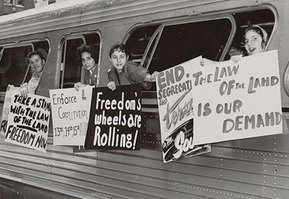 The Congress of Racial Equality (CORE), founded in Chicago in 1942, crusaded for equality through nonviolence and integration. It came to North Carolina on a 1947 southern bus during a "Journey of Reconciliation," when an interracial group that included North Carolinians faced arrest for not riding in segregated seats. By 1963 CORE had nine chapters in the state, hundreds of members (many of them student activists), and leaders such as black attorney Floyd B. McKissick (1922-91), who became chairman and later national director of CORE. Like its 1961 Freedom Ride, CORE's voter education projects and sit-in campaigns helped energize the struggle for civil rights in North Carolina. In 1966 the organization embraced Black Power, emphasizing self-determination over nonviolent direct action.