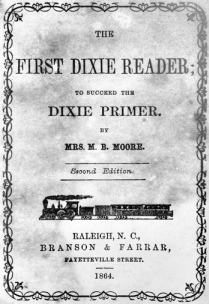 during the civil war, printing in north carolina, as well as in the other confederate states, was severely restricted by the shortage of manpower and supplies. north carolina had 74 newspapers in 1860 but fewer than half that number by 1864. the state printed legislative, executive, and supreme court documents, as well as recruiting broadsides. some private printing dealt with politics in the form of pamphlets or campaign broadsides. religious works counted for a great percentage of north carolina's confederate imprints.

blum's farmers' and planters' almanac, published by l. v. and e. t. blum of salem, and turner's north carolina almanac, published by henry d. turner at the raleigh register printing plant, managed to continue throughout the war years. other surviving imprints relate to hospitals and medicine.

the greensboro firm of sterling, campbell, and albright printed numerous schoolbooks, as did the raleigh firm of branson and farrar, but only a few works of new fiction appeared in the state. hester and other poems (1861), by theophilus h. hill (1836-1901) of north carolina, was the first book published under the confederate states' newly established copyright law.

some sheet music and a few music books, or "songsters," were also produced in north carolina.