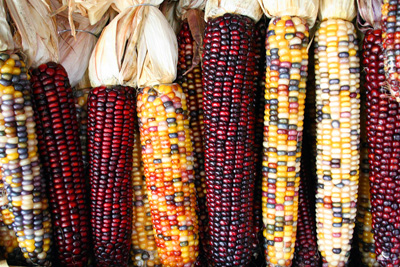 Food, next to water, is the most important need to support human life.  Modern American society has grown comfortable with the ease of obtaining food; it has forgotten the long history of food development and growth that expanded from the hunting and gathering days of the earliest American colonists. In colonial America, before the grocery store, men and women had to hunt, gather, or cultivate food, and at times wait for shipments from Europe, in order to survive. The work needed to secure sustenance molded society and the way colonists lived and expanded in America in colonial times.


Modern Thanksgiving feasts contrast sharply with the experience of Pilgrims and Indians at the first Thanksgiving: on today’s table there is an abundance of food including a large turkey, mashed potatoes, sqaush, corn, stuffing, cranberry sauce, and other staples. However, this is not an accurate picture of feasts or daily life in colonial times.  Early explorers described an abundance of food and claimed the land full of wild animals and plants.  This gave the impression that colonists would have no trouble having an adequate supply of food. However, long, cold winters held many colonies captive by famine, and with inadequate farming  in early settlements, colonists were dependent upon trade with Native Americans or supplies from England to replenish stores. Stores depleted quickly, and despite new supplies from England, colonists were at times barely able to make it through the winter, resorting to “half rations”.


Starvation was a real threat in early settlements. The "Starving Time" at the Jamestown (Virginia) colony during the winter of 1609-1610 was noted by John Smith and George Percy, the president of the colony, and referred to by Percy as “"this starveinge Tyme". And although there are written accounts of Jamestown cannibalism, it was not until the discovery of a female body, dubbed “Jane”, that physical evidence was found to support the writings of colonists in Jamestown.  The victim, “Jane”, unearthed by Jamestown Archeaologists in 2012 in a 17th century trash deposit in a cellar of a 1608 building at James Fort, showed evidence of a butchered skull and shinbone.  This discovery helps us fathom the starvation of Jamestown and the desperate situation the colonists were in to survive. Cannibalism, however, was not widespread.  The limited number of accounts of these events (with possibly only one first-hand report) has lead historians to believe that this was a small contained event in Jamestown that only a few desperate colonists took part in. Still, food scarcity and starvation were prominent among settlements including North Carolina.


The Thirteen Colonies: Farming with a Fat Stomach


Although off to a rocky start, the colonies became great food producers in good time. Once the British colonists solidified their hold in the new world, access to food proved to be different from of the days of John Smith and colonial Jamestown. Indentured servitude and slavery granted colonists an extended workforce to expand farming capabilities and increase their wealth.  Colonists grew enough food to support their families and in some cases were able to step away from subsistence to trade, barter, and sell.


The harvests gathered by colonial farmers included an expansive number of crops: beans, squash, peas, okra, pumpkins, peppers, tomatoes, and peanuts. Maize (corn), and later rice and potatoes were grown in place of wheat and barley which were common European crops that did not take readily to eastern American soil.  Probably one of the most important contributions to colonial food was the adoption of Native American agricultural practice and crops, chiefly corn and tobacco. Tobacco was a valuable export and corn, debatably the most important crop in colonial America, was used to feed both people and livestock. Colonists also harvested wild animals from hunting and fishing to supplement their diet with important protein. These included rabbit, squirrel, possum, raccoon, deer, bear, and fowl as well as many types of fish and shellfish.


Indentured servitude, followed by slavery, bolstered the farm production of colonial America, particularly in the southern colonies. Indentured servants, white immigrants from England, were the first population to cultivate the land under a master. Ideally these workers would work off their immigration debt and later buy their own land to cultivate, however, this was not always the case and indentured servants often became victim to a perpetual cycle of an inescapable labor system. Beginning in 1619 with the importation of the first African slaves, the agriculture system throughout the eastern seaboard grew quickly, and by 1700 slavery had displaced indentured servitude in the southern colonies.  Before the advent of mechanized tools, farming during colonial times was hand-labour agriculture, accomplished by the hoe, scythe, and axe, and plow. These tools, in conjunction with cheap labor made available by slaves, allowed for increasingly sustaining harvests and the production of crops for trade.


Carney, J. 2001. Black rice: The African origins of rice cultivation in the Americas.

Personally, I feel this

Personally, I feel this website should be based not off of thanksgiving, but on how they harvested and planted their crops. I've learned more fro other websites on how the Colonies brought their own different ways on farming/harvesting and i was planning on learning more. but this website did nor carry that information. Maybe if this website carried some other type of information that would be great. Sorry if this sounded intruding in any way, but it would be helpful.

thx so much it helped me

thx so much it helped me

You said nothing about how

You said nothing about how they got the foods that they grew, the Native Americans, or how they farmed or squat. All I can find is what they had and ended up getting. You need more info on this.

I wanted to know what the

I wanted to know what the farmers required

Hi -- thanks for visiting

Hi -- thanks for visiting NCpedia. It sounds like you have more questions about colonial life for farmers.  Please let us know what a bit more about what you are looking for and we'll try to help. Please feel free to leave another comment here.

i was looking for the food

I am working on a research

I am working on a research paper about the new york colony and it helped me so much. Thank you!!

I came looking for what tools

I came looking for what tools they used so I could compare farming today to back then.

This entry has some additional resources that have been added for more information.  You may want to investigate them. Some are books and others are available online.  If you're looking for online resources, here are a few that might help:

Early American tools at the University of Massachusetts: http://www.memorialhall.mass.edu/activities/tools/index.html

If you're working a school project, you may also want to visit your school's media center or your local public library.  Librarians there can help as well.