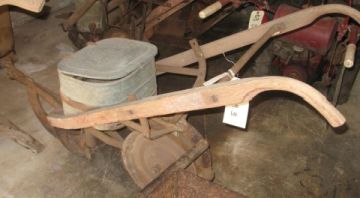 Cole Manufacturing Company was founded by brothers E. M. and E. A. Cole in Charlotte in January 1900 to manufacture seed planters invented and patented by E. M. Cole. Brightly painted farm implements bearing the Cole Manufacturing Company label were a common sight on North Carolina farms during the first half of the twentieth century. By the mid-1920s, the company was the world's largest factory devoted solely to making seed planters and fertilizer distributors.

Cole Manufacturing, which operated its own foundry, made the transition from mule-drawn implements to multirow tractor-drawn implements and had sold more than 2 million seed planters, fertilizer distributors, and grain drills in the domestic and export markets by 1961. By the mid-1970s, the company had introduced a line of hand-pushed equipment to capitalize on the interest in home gardening. Jean Cole Hatcher succeeded her father, E. A. Cole, as president of the company, and she was followed by her son John Cole Hatcher. The company ceased operations in the early 1980s.