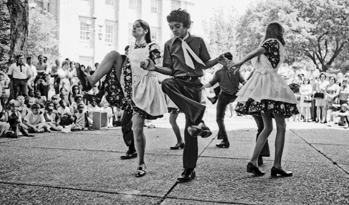 Clogging is a form of traditional solo step dancing to traditional string music common in western North Carolina and growing in popularity across the state and nation. The term has been used to describe the dance only since about 1930. Clogging differs from flatfooting in that flatfoot dancers rest on their heels and keep their steps low to the floor, whereas cloggers come down on the toes or balls of the feet and incorporate high kicks of the feet. Unlike buck dancing, where dancers also use the toes, clogging also incorporates heel strikes on the floor. Since the 1930s, teams of cloggers have performed for audiences, and performance has been a powerful engine of change in clogging. Most cloggers use taps to amplify the sound of the rhythms made by their feet, while most flatfoot and buck dancers use regular shoes. Many clogging teams do primarily "precision clogging," which is a choreographed dance incorporating traditional steps in a preestablished pattern which is performed in unison by all the dancers. In North Carolina, clogging has been popularized by Bascom Lamar Lunsford's Mountain Dance and Folk Festival and the Stompin' Ground in Maggie Valley.