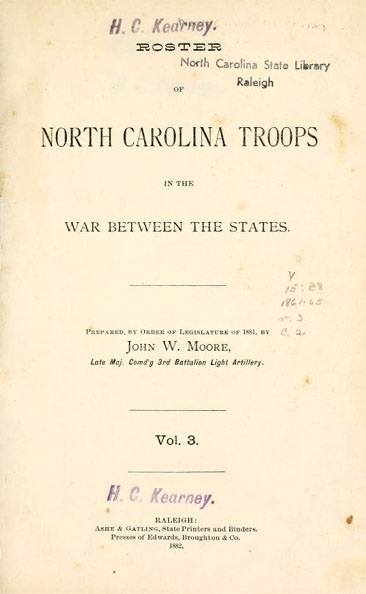 A Roster of North Carolina Troops in the War between the States, by Confederate veteran John Wheeler Moore, was an undertaking by the state of North Carolina in 1881 to publish a list of its Confederate soldiers. The four volumes of Moore's Roster, as it came to be called, include the names of 106,498 soldiers-about 70 percent of the state's Confederate troops-and are arranged by military unit. The last volume, after identifying the regiments and separate battalions, lists general and staff officers or North Carolinians in the Confederate navy and elsewhere. For each individual recorded, the roster generally gives rank, date, and county of enlistment. Remarks about promotions, desertions, injuries, capture, and death in battle are sometimes noted.

Louis H. Manarin headed the Civil War Roster Project from 1961 until February 1970, when Weymouth T. Jordan Jr. took over the editorship. Rosters are arranged numerically by regiment and then alphabetically by company. A field and staff section precedes the company roster for each regiment. Within each company roster, officers and enlisted men, excluding captains, appear alphabetically in separate sections. Captains and field and staff personnel are listed by date of rank. Each name is followed by a service record of approximately 100 words that includes, if known, the soldier's county of birth and residence, his age and occupation at the time of enlistment, his promotion record, whether he was wounded, captured, or killed, and whether he deserted or died of disease.

The Civil War Roster Project had published 15 volumes by 2006. Volumes 1 and 2 cover artillery and cavalry units, respectively; volumes 3-15 contain rosters and histories of infantry units. Volume 16 will present additional Confederate infantry regiments, and volume 17 will contain rosters of miscellaneous Confederate units such as the junior and senior reserves, militia, Home Guard, navy, and marines. It will also include North Carolina Federal troops (four regiments of African American soldiers and four of whites) and many North Carolinians who served in units from other states.