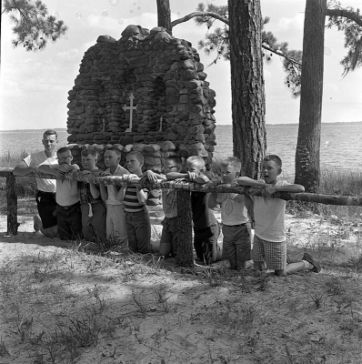 Many churches of a variety of denominations maintain facilities throughout North Carolina used for recreational camping, meetings, retreats, and other events. Mountain areas have been attractive to such groups because of their cool evenings and beautiful scenery, while seaside camps have provided church members with good swimming, sandy beaches, and some privacy for their programs. The United Methodist Church maintains one of the shining lights of church camping facilities in North Carolina-the Lake Junaluska Conference and Retreat Center in Haywood County. The site includes youth facilities, an open-air auditorium, hotels, and hundreds of private dwellings. Drawing patrons from Methodist churches throughout the Southeast, a town has grown up around the lake, which is the reservoir formed by a dam built in the early part of the twentieth century.

There is no accurate census of mountain church camps, but it is believed that more than 15 established denominational camps exist in the Blue Ridge Mountain area. Montreat, a sprawling facility near Black Mountain (Buncombe County), has been a significant part of the worship and ecclesiastical life of southern Presbyterians since its purchase by the church in 1906. The Black Mountain area is also home to church camps run by Free Will Baptists and Disciples of Christ. Nearby is Ridgecrest, a Southern Baptist Camp serving North Carolina churches. The Episcopal Church maintains Kanuga in the mountains (a retreat center for all ages in the Brown Summit area), Vade Mecum for youth, and Camp Leach in the east.

The most prominent seaside camp is at a former military installation called Fort Caswell, in Brunswick County, where the Southern Baptists have developed a thriving camp that is used by youth, families, and individual churches. The Neuse River has provided sailing as well as water sports for camps like Don Lee (a United Methodist camp) and Camp Caroline (a Disciples of Christ camp). Lakes have been the site of several camps, such as the Rockfish Camp near Fayetteville and Camp Chestnut Ridge near Eno. Several church camps have been established at Lake Norman and other lakes near Charlotte. The Roman Catholic Church is particularly interested in retreat centers and has expanded its program and facilities throughout North Carolina.

In addition to Christian groups, Buddhists have established Zen centers both in the mountains and in the Chapel Hill area, and Muslims have begun to enter the religious camp trend in the state.

Tommy Midyette changed my life, gave me hope in Jesus at age 8. me

Not Nancy nreck. And Camp

Not Nancy nreck. And Camp Leach and Tommy Midyette changed my life and gave me a relationship with Jesus, though it has been a life taking it to happen. I am still hanging in there but Tommy gave me the connection.

camp centrikid is located on

camp centrikid is located on black mouintain. it is the best!!

Camp Leach near Bath, and

Camp Leach near Bath, and Camp Oceanside at Ocean Beach closed in 1985 as the expansion of Trinity Retreat was completed on Emerald Isle NC by the Episopal Diocease of East Carolina (now known as Trinity Center). See http://www.trinityctr.com/campt/ & http://oceancitync.com/Archives.html Trinity Center hosts Camp Trinity each summer. My brothers and I attended Camp Leach during the summers of the 1960s, and these are amoung my fondest memories of growing up in East Carolina. More pics of Camp Leach can be found at http://digital.lib.ecu.edu/reflector/search.aspx?index=dcsubjects&q=Camp... Carolina--Beaufort County