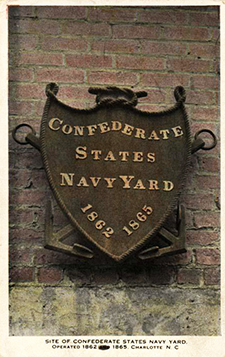 Charlotte became one of the Confederate navy's most important manufacturing centers during the Civil War. The incongruity of a landlocked city housing a navy yard is explained by its location in North Carolina, where it was relatively safe from potential Federal activity. The city was also an important rail center that facilitated movement of matériel throughout the South.

In May 1862 the Confederacy established a navy yard in Charlotte to replace the one lost at Norfolk, Va. Early that year, fearing that it might be forced to abandon the facility, Confederate secretary of the navy Stephen Mallory quietly instructed the commander at Norfolk to begin planning for the relocation of machine tools and equipment that were not required for current projects. Charlotte was selected for the new site because of its rail connections with coastal cities. The government in Richmond purchased property and immediately began planning to establish a navy yard in the city. In early May the first equipment, including lathes, planers, and a small steam hammer, was moved to the new facility.

The importance of the new yard can hardly be overestimated. It manufactured nearly all of the propellers, shafts, and anchors for the Confederate navy. Additionally, although power plants complete with boilers and engines were not made there, many of the parts for them were. The Charlotte Navy Yard was the only Confederate facility capable of such heavy forging. It also produced ordnance for vessels, including gun carriages. In June 1863 Charlotte became responsible for casting all of the shot and shell for the vessels in Charleston and Savannah. Further, the yard was capable of forging specialized wrought-iron shot for use against Union ironclads. The Charlotte Navy Yard remained in operation until the final flight of the Confederate government in April 1865.