"I must sing my song. There may be other songs more beautiful than mine, but I must sing the song God gave me to sing, and I must it sing until death." -- Charlotte Hawkins Brown 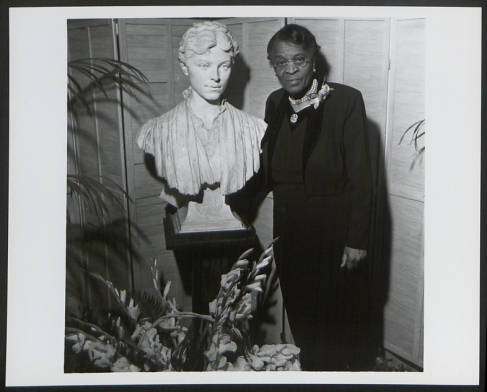 Charlotte Hawkins Brown was born in 1883 in Henderson, North Carolina. She was the grandchild of formerly enslaved African people. Charlotte and her family moved to Cambridge, Massachusetts when she was very young. It was progressive and more welcoming towards African Americans than the South. In Massachusetts, she received an excellent education and that made her want to help others build better lives through education.

In Cambridge, Charlotte attended Cambridge English High School. Then she attended Salem State Normal School in Winston-Salem, North Carolina in 1900. At Salem she studied to become a teacher. She wanted to help children in the South. So she left Salem after one year to teach at a small school in Guilford County. The school was in very bad condition. And the students were too poor to own shoes. Charlotte worked hard to make the school better, but it closed after one year.

Charlotte Hawkins Brown still wanted to improve the lives of African Americans in the South. So she decided to stay and open her own school. She worked with friends still living in the north to raise money for a school. And the Palmer Memorial Institute opened in Sedalia, North Carolina in 1902. Charlotte named the school for Alice Freeman Palmer. She was a friend and benefactor from Massachusetts. The school began in an old blacksmith shop on the property and later grew to a large campus with many buildings. And it became both a day school and boarding school for African Americans.

The school tried different types of education including teaching students trades. It finally became a school to prepare students for college. Schools for African Americans at the time focused on training for manual labor jobs. But students at Palmer Memorial Institute also studied literature, math, and the arts. Students also had classes in discipline and good manners.

Charlotte Hawkins Brown led the school until she retired in 1952. She died in 1961 in Greensboro, North Carolina at the age of 71. Palmer Memorial Institute continued to operate after her death, but it closed after a fire in 1971.

From 1902 to 1970 more than 2,000 African American students studied at Palmer. Many went on to make important contributions in teaching, the arts, law and medicine and in many other careers. And we remember Charlotte Hawkins Brown as a pioneer in African American education. Today Palmer Memorial Institute’s buildings have been restored, and the site and buildings are now a state historic site and museum dedicated to her life. The museum was the first state historic site in North Carolina to honor a woman.

If you had to dedicate an historic site or museum to a woman, who would she be?

The Rise and Fall of Jim Crow, PBS: https://www.thirteen.org/wnet/jimcrow/stories_people_brown.html