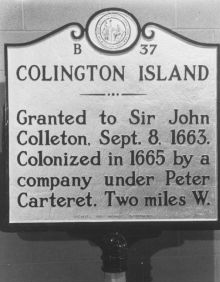 Peter Carteret (b. 1641) inherited a suffering and divided Albemarle County and the duty to implement the Fundamental Constitutions. He was born on the British Island of Jersey, the son of Helier de Carteret and Rachel La Cloche Carteret. Proprietor George Carteret was his fourth cousin. Carteret arrived in Albemarle County in February 1665 with several government appointments. In 1668 Governor Samuel Stephens made Carteret lieutenant colonel of the militia.

Following Stephens’ death, the Albemarle Council chose Carteret as acting governor on March 10, 1670. The Lords Proprietors later confirmed his appointment. When Carteret assumed control, Albemarle was suffering because economic disasters and diseases had brought the colonists to the brink of poverty and starvation. Adding to Albemarle’s problems, the Lords Proprietors expected Carteret to implement the Fundamental Constitutions. The new plan of government increased tensions between the anti-proprietary faction consisting of pre-1663 charter settlers and the proprietary faction made up of post-1663 charter settlers. The anti-proprietary faction apparently feared that the new government’s feudal structure might force them to give up such status as they had achieved. The Fundamental Constitutions also rendered land titles given by the Virginia Council or purchased from Indians invalid which, if enforced, would result in the loss of land for the anti-proprietary faction. Furthermore, quitrents were to rise and a new complicated land division system was to be enacted. The Fundamental Constitutions, however, provided the proprietary faction with the opportunity to take control of the government.

Carteret, a supporter of neither faction, was troubled about the future of the Albemarle region. In May 1671 the council sent a letter to the proprietors expressing opposition to parts of the Fundamental Constitutions. The council did not receive a response. Consequently, the council in April 1672 sent Carteret and John Harvey to London to present their grievances to the Lords Proprietors and to obtain aid from them. Only Carteret made the trip to London. Before Carteret left for London, the temporary plan of government as instructed by Fundamental Constitutions was instituted. The assembly also reviewed all the laws as instructed by the proprietors and re-enacted ones that it considered proper for the colony. Carteret was assigned to present the laws to the Lords Proprietors for review.

Carteret’s trip to London turned out to be a disaster. He learned that the Lords Proprietors planned to dispose of their interest in Albemarle to fellow proprietor and Virginia Governor William Berkeley. The proprietors were unsympathetic to Carteret because they expected to be free of Albemarle. However, even after years of negotiations, their plan never came into realization.

Aside from his governmental duties, Carteret ran a plantation at Colington Island owned by four proprietors. The plantation was unsuccessful because of scarce labor and supplies and natural disasters. Due to insufficient financing, Carteret often paid the expenses of running the plantation using his own money. Carteret had hoped to go back to the Albemarle region in some capacity other than as governor; however, he never returned. By 1680, the Lords Proprietors were blaming Carteret for the problems that led to Culpeper’s Rebellion. Carteret’s death date is unknown.