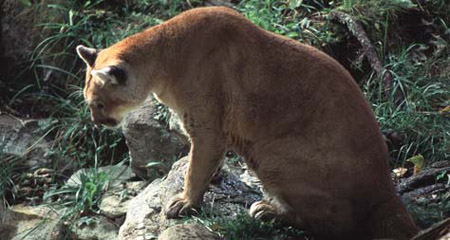 Felis concolor couguar but more recently as Puma concolor couguar, the cautious and intelligent Carolina panther, once prevalent in North Carolina, is now considered extinct in the wild by most zoologists despite consistent rumors of sightings and species resurgence. The variety historically present in North Carolina was likely the eastern puma or cougar, though the range of the Florida panther extended through most of the Southeast and certainly into parts of South Carolina. When the New World was first explored, panthers were found from coast to coast and from southern Canada to Tierra del Fuego. Thomas Harriot in 1588 recorded that the Indians sometimes hunted and ate them. On 25 Apr. 1861 the Raleigh Weekly Ad Valorem Banner reported that a panther, measuring 7 feet 4 inches long and 2.5 feet tall, had been killed at the head of the Pungo River. Carolina panthers, showing little fear of humans, lived in close proximity to people if their needs for food, water, shelter, and an escape route were met.

By the early twentieth century, extensive hunting combined with a decrease in the population of the panther's primary prey, white-tailed deer, and deforestation in its natural habitat, had made the panther very rare throughout the Southeast except in a small area of southern Florida. Reports of panthers in North Carolina continued, however, and increased when the North Carolina Wildlife Resources Commission implemented a program to reestablish a deer herd for hunting. Between 1937 and 1993, 121 adult panthers and 17 panther kittens were claimed to have been sighted, though reports have generally been unverifiable and attempts to lure the cats into camera range have proved fruitless.