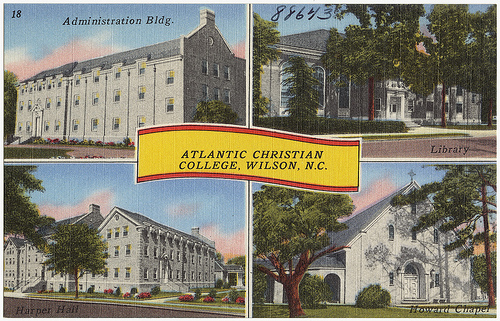 Carolina Christian College, a precursor of present-day Barton College in Wilson, was established by the Disciples of Christ in 1893 in the Pitt County town of Ayden, where it operated until 1903. By the late nineteenth century the Disciples had established a number of academies in eastern North Carolina and directed their convention president to seek a site for an institution of higher learning. Bids were received from Wilson's Mills, Dunn, Grifton, and Ayden. The trustees accepted the Ayden offer of $500 and five acres. Incorporated in 1890, the town was on the railroad and, importantly for the Disciples of Christ, was centrally located in the eastern counties where the greatest strength of the denomination rested.

At a trustees meeting in the spring of 1893 the name Carolina Christian College was chosen, and construction soon commenced on two buildings. Classes were held in the fall of 1893, with 17 students on the rolls. The first principal was L. L. Rightsell (1862-1927), a minister and Indiana native. In 1901 the annual convention of the Disciples of Christ (also known as the Christian Church) voted to establish a larger college in Wilson on the campus of the former Kinsey Institute. Atlantic Christian College opened in 1902; the following year the school in Ayden closed and the land and buildings were sold. In 1990 Atlantic Christian was renamed Barton College for church founder Barton W. Stone.

Act to ban sell of liquor near Carolina Christian College, Public laws and resolutions of the State of North Carolina passed by the General Assembly at its session of...[1903], NCDCR Digital Collections: http://digital.ncdcr.gov/cdm4/document.php?CISOROOT=/p249901coll22&CISOPTR=231679&REC=5