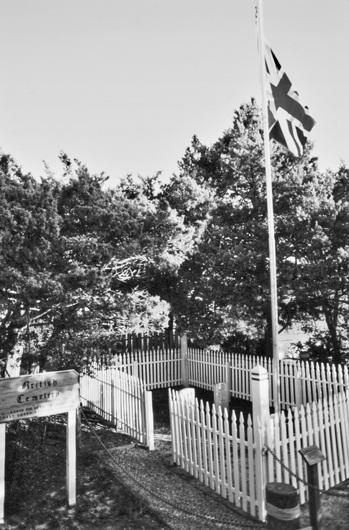 The British Cemetery on Ocracoke Island is a small cemetery containing the graves of four British navy personnel killed while helping defend the North Carolina coast against German U-boats (submarines) in World War II. In March 1942, the 900-ton HMS Bedfordshire was one of 24 armed trawlers sent by Great Britain to help the U.S. Navy defend the Atlantic coast of the United States against U-boat attacks. On 11 May 1942, the Bedfordshire was torpedoed and sunk by U-558 southeast of Cape Lookout with a loss of all 37 crew members. The bodies of two crew members, Lt. Thomas Cunningham and Ordinary Telegraphist Stanley Craig, washed ashore on Ocracoke, and the Coast Guard buried them in a small cemetery plot donated by a local family. A week later, two additional Bedfordshire crew members, unidentified, washed up and were also buried in the plot.

Later fitted with permanent markers and enclosed by a white picket fence, the four graves have since become well known as the British Cemetery of Ocracoke. Currently, a bronze plaque engraved with words from Rupert Brooke rests on the fence, serving as a fitting tribute to the four men who died in war far from home: