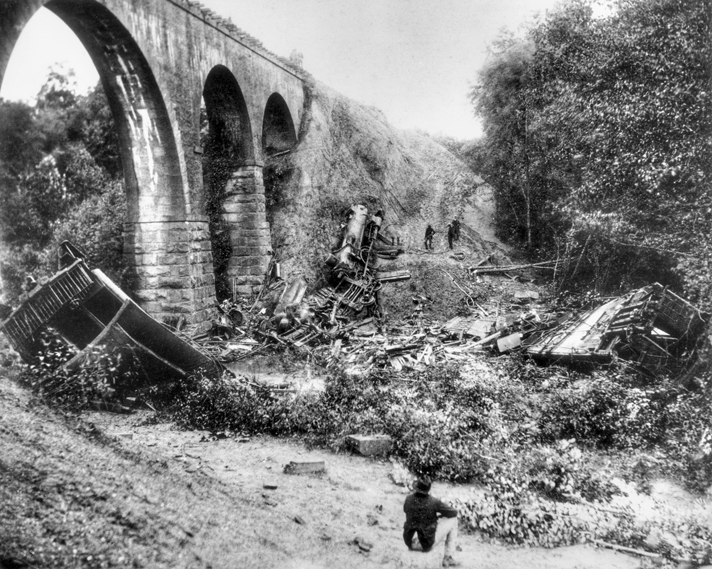 The Bostian Bridge train wreck occurred on 27 Aug. 1891, just west of Statesville. The accident took the lives of 23 people, making it one of the worst railroad disasters in North Carolina history. Richmond & Danville Railroad (R&D) engine number 9 left Statesville at approximately 2:30 a.m., pulling six cars: a tender, a baggage car, a second-class car, a first-class coach, a Pullman sleeper, and the private car of the R&D's superintendent. According to station hands, engineer William West was 34 minutes late and left Statesville in a hurry, obviously intending to make up time.

Less than five minutes after leaving Statesville, the train plunged off Bostian Bridge, a 60-foot-high, five-span brick tower bridge crossing Third Creek. Because of its speed-later estimated at 35 to 40 miles per hour by the coroner's jury-the train, according to survivors, was literally airborne when it derailed. The sleeping car hit the ground 153 feet from where it left the bridge.

Several battered survivors walked back to Statesville to announce the disaster, and all normal activity ceased that day as the town immersed itself in the rescue effort. The injured were transported to Statesville, which had no hospital, and placed in private homes. The dead were taken to a tobacco warehouse to be viewed for identification. 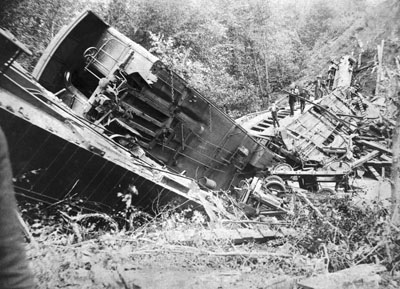 Once the rescue effort ended, the wreck site became a magnet for the curious. Thousands of people arrived to stare off the bridge at the wreck or to prowl among the debris. Photographers William Stimson of Statesville and a Mr. VanNess of Charlotte took pictures and, according to the Statesville paper the Landmark, sold hundreds in the coming weeks. A story of the wreck with a VanNess photograph appeared in Frank Leslie's Weekly, an illustrated newspaper. The Police Gazette of Boston carried a story illustrated with what the Landmark called "one of its loud imaginary pictures."

Four days after the accident, a coroner's inquest concluded that it was caused by unknown persons removing spikes from the rails, though some blamed the track's neglected condition. Inasmuch as the R&D was experiencing financial troubles, officials, fearing huge damage suits, worked feverishly to find the alleged train wreckers. For months, railroad detectives swarmed over the area. Several people were detained and questioned but eventually released. In 1897 two men already in the state penitentiary were convicted of causing the tragedy on the strength of their supposed confessions to other inmates.

The locomotive and remains of wooden passenger cars at the base of the 60-foot-high Bostian Bridge over Third Creek near Statesville. Photograph by William Stimson, courtesy of Betty Boyd. North Carolina Collection, University of North Carolina at Chapel Hill Library.