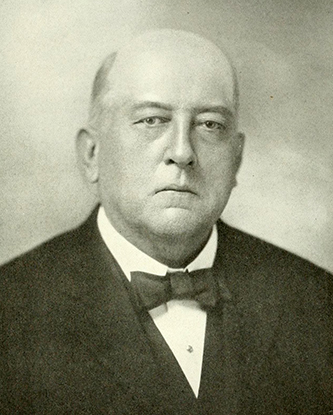 Richard Harvey Wright, industrialist, was born in Franklin County, the son of Thomas Davenport and Elizabeth Glover Harris Wright. His grandfather, Griffin Wright, was a native of England. As a youth Wright attended Louisburg Male Academy and Horner Preparatory School near Oxford. His father died when he was six and his mother when he was fourteen. He then went to Oxford and apprenticed himself to a merchant for three years (1869–71). The inspiration to learn that he acquired from his teacher, T. J. Horner, never left him, and while serving the apprenticeship Wright studied diligently and read, particularly poetry and biographies of important men. At the end of three years Wright and his employer formed a partnership that lasted until 1874, when their business was destroyed by fire.

Taking another partner, Wright rented a building in Durham in 1877 and began to manufacture smoking tobacco. The next year he bought his partner's interest, erected his own building adjacent to Washington Duke's factory, and began to go on long sales trips around the country. He was an excellent salesman and acting alone impressed Duke to the extent that in 1880 Duke invited him to become a partner. For four years Wright traveled around the world—Africa, India, China, Japan, the Philippines, Australia, and elsewhere—making friends, becoming a true cosmopolite, and expanding the company's business.

Returning home after four years, he married Mamie Exum of Wayne County in June 1884; they became the parents of a daughter, Mamie Exum Wright. About this time he sold his interest in Duke's tobacco company and moved to Lynchburg, Va., where he bought an interest in another tobacco factory that he operated for four years. In December 1888 Wright became the agent for the Bonsack Cigarette Machine and soon had it installed in factories in China, Japan, the Philippines, India, and Africa. As president of Wright's Automatic Tobacco Packing Machine Company, he saw his machine used by most U.S. tobacco manufacturers. He also was director of two coal and coke companies in West Virginia, acquired an interest in the United Machine Company in London, was president of the Durham Traction Company, which installed streetcars, and was a large real estate owner in Durham. In addition, he had an interest in a press that manufactured soap, and he played a role in developing public utilities.

Wright was a member of the Masonic order and of the Methodist Episcopal church; with the exception of one election, he voted a straight Democratic ticket. He was extremely generous with his wealth, aiding numerous causes, particularly homeless children and education for women, but always privately and without fanfare.

Two of Wright's sisters and two nephews made their home with him. He was interred in the Wright mausoleum in Maplewood Cemetery, Durham.