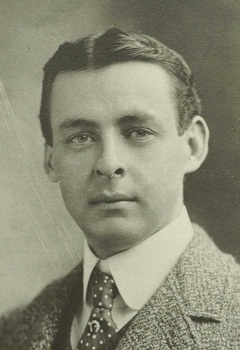 Oscar Scott Woody was a postal clerk from North Carolina on board the ocean liner R.M.S. Titanic when it sank April 15, 1912. He was likely born in Holloways Township near Roxboro, on April 15, 1871. His birth year is usually given as 1868, but both census records and his marriage license application support the later date.

He worked at the Third division of the Railway Mail Service for 15 years on the trains running between Greensboro, N.C. and Washington, D.C. before getting transferred to the Sea Post about about 1910. A Sea Post position aboard a ship was a choice assignment; mail clerks made the considerable sum of about $1,000 a year.

He sailed from New York City on the SS Kaiser Wilhelm der Grosse to Plymouth, England, and then traveled to Southampton to board the SS Titanic. The ship had five postal clerks aboard, two British and three American. R.M.S. stands for Royal Mail Ship, and the Titanic had 3,364 sacks of mail aboard for the clerks to sort during their journey. Originally the mail clerks' sleeping cabins were in Third Class, but were moved following complaints about the noise, and they were also granted permission to dine in a private area. 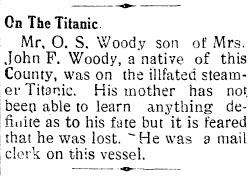 Woody was a day from celebrating his 41st birthday when the disaster struck. Woody and the other four mail clerks worked diligently to save the mail in their care. They opened the registered mail cage of the ship's post office below decks and attempted to drag some 200 sacks of registered mail upstairs to the decks, in the hopes that it could be saved. Titanic steward Albert Theissinger assisted the clerks before he abandoned the task, leaving them slogging through some two feet or more of rising water:

"I urged them to leave their work. They shook their heads and continued at their work. It might have been an inrush of water later that cut off their escape, or it may have been the explosion. I saw them no more."

Woody's body was recovered a week later by the CS Mackay-Bennett, wearing a cork life jacket. In his pockets were facing slips, used by the clerks to sort, identify, and route the mail. They were stamped with his name, so any errors or problems could be traced back to him. Also recovered were his pocketknife, pocket watch, cuff links, a key and chain, and Freemason dues cards. His body was identified by a letter to his wife in his pocket. Due to its poor condition, Woody's body was buried at sea on April 24, 1912.

Woody had married his wife, Leelia M. Bullard of Dallas Texas, only 18 months earlier. Born February 20, 1879, she was 31 when they applied for their marriage license on October 5, 1910, in Washington, D.C. She graduated Valparaiso University in 1912 and was a secretary. They had a home in Clifton, Virgina, but Woody also occasionally stayed in New York City to board different ships with the Sea Post. His wife never remarried, and sued the White Star Line for $50,000 but did not receive compensation. U.S. Postmaster General Frank H. Hitchcock recommended Congress authorize a $2,000 payment to each of the postal clerks' families:

"The bravery exhibited by these men in their efforts to safeguard, under such trying conditions, the valuable mail entrusted to them should be a source of pride to the entire postal service and deserves some marked expression of appreciation from the government."

Woody was also a member of the Freemasons at the Acacia Lodge No. 16 in his hometown of Clifton, Virginia. He reached the level of Master Mason, a title awarded him on August 30, 1903. His lodge had a memoriam printed in the May 5, 1912 Fairfax Herald.

"For the Sake of the Dead: The Hearts of the Whole Country Touched by Titanic." Augusta Chronicle.  April 21, 1912.

"In Memoriam." The Fairfax Herald. May 5, 1912. Courtesy of the Fairfax County Public Library's Virginia Room