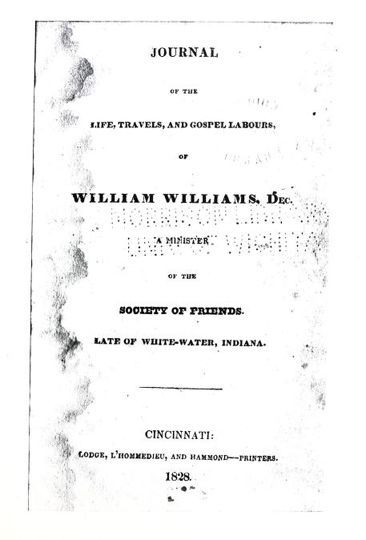 William Williams, Quaker leader and author, was born in Chatham County. His father died when he was young, and he was educated by his mother. Apprenticed at age nineteen to a member of the Center Meeting of the Society of Friends, his feelings grew for the church under the kindly treatment of his master.

On 16 Mar. 1786 he married Rachel Kemp, and they settled in Tennessee where they joined the Lost Creek Quarterly Meeting. In 1799 or 1800 Williams became a minister. Setting off on a preaching tour in 1804, he visited Georgia, South Carolina, and North Carolina, and in 1807 he toured Ohio. The next year he moved to Blount County, Ohio, and helped to organize a new congregation. Finally in 1814 he settled in White Water Valley, in eastern Indiana, where he spent the remainder of his life as a minister. He traveled widely, however, visiting Friends and preaching in Virginia, Delaware, Pennsylvania, New Jersey, New York, and Rhode Island. His journal indicates that he frequently made his way back to North Carolina. Williams occasionally held services for other denominations. His final journey was to the Yearly Meeting in Philadelphia in 1823. He was ill when he returned home and was confined to his room and to bed for the remainder of his life.

It probably was shortly after his death that his followers published a four-page leaflet by him, entitled: An Address: The following communication from our beloved friend, William Williams, dec., being presented to the Meeting for suffering of the Society of Friends of Indiana yearly meeting, was examined and approved by that body, and directed to be published. There is a copy of this piece in the Haverford College library in Pennsylvania.

On his travels Williams kept a careful journal that was published in Cincinnati in 1828, four years after his death. Entitled Journal of the Life, Travels, and Gospel Labours, of William Williams, Dec., A Minister of the Society of Friends Late of White-Water, Indiana, it is regarded as a highly valuable source of information on the southern and midwestern states that he visited. A copy, now in the North Carolina Collection at the University of North Carolina in Chapel Hill, that belonged to Elijah Coffin of Milton, Ind., bears the neatly penned inscription: "Wm. Williams Journal was copied from his Manuscript which was amended & corrected by my father. It was so neatly done that the printer handed it over to the younger boys in the Office—one of these was David P. Holloway—afterwards a member of Congress." In 1839 a new printing, of which there also is a copy in the North Carolina Collection, was issued in Dublin by printers Webb and Chapman for William Robinson of Belfast.