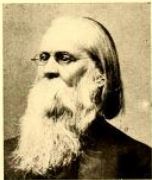 John Thomas Wheat, Episcopal priest and university professor, was born in Washington, D.C., the son of Thomas and Mary Chatham Wheat. The founder of the line, Francis Wheate, emigrated from England in 1724, settled in Prince George County, Md., and married, though no record of his wife's name exists. Francis had at least two sons, John (b. ca. 1730) and Francis (b. ca. 1745). John Wheate married Mary Mullikan, and from this union came nine children, one of whom, Thomas, married Mary Chatham. The family estate, Cool Springs, was located in Maryland almost directly across the Potomac River from Alexandria, Va.

John Thomas Wheat (he dropped the final e from his name) was trained for the ministry at the Virginia Theological Seminary, in Alexandria, Va., and while there he conducted a school for about thirty advanced students. During this period he fell in love with Selina Blair Patten and married her on 10 Mar. 1825. She was the daughter of Thomas and Mary Roberdeau Patten and the granddaughter of General Daniel Roberdeau, a wealthy merchant of Philadelphia and a general in the Pennsylvania troops. The Wheats had eight children, five of whom reached maturity. Roberdeau Chatham, the oldest, was a soldier of fortune and was killed during the Civil War as was a younger brother, John Thomas. The last child, Leonidas Polk, named for the distinguished Episcopal bishop who became a Confederate major general, studied in Paris under Franz Liszt and became a concert pianist. One of Wheat's daughters, Selina Patten, married Dr. John Seay of Nashville, Tenn., and the other, Josephine May, married Francis E. Shober.

Wheat was admitted to the diaconate of the Episcopal church by Bishop William Channing Moore at Christ Church, Alexandria, in 1825 and the next year was ordained a priest in St. Paul's Church, Baltimore. During 1826 he served as rector at St. John's, Anne Arundel County, Md. From this time on Wheat made frequent changes of parishes. In 1829 he took charge of St. Matthew's Church, Wheeling, then in Virginia, and in January 1833 he moved his little family, which now numbered three children, to Marietta, Ohio, where he became rector of St. Luke's for three years. In 1836 Wheat went to New Orleans to recuperate from a severe illness. While there, he was engaged for three months by the vestry of Christ Church, which was temporarily without a rector. Shortly after he returned to his parish in Marietta, the Domestic Committee of the Episcopal church sent him back to New Orleans to establish a mission in the upper part of the city. The many friends he had made there supported the mission to such an extent that it soon grew into the self-supporting parish of St. Paul's. Two events, however, induced Wheat to leave New Orleans. A subscription of $40,000 to build a church was wiped out by the panic of 1837. And during this financial crisis he was called to Christ Church, Nashville, Tenn., to which he moved his family in 1837.

In 1849 the chair of Rhetoric and Logic at The University of North Carolina was left vacant by the resignation of the Reverend William Mercer Green, and through the influence of Bishop James H. Otey of Tennessee Wheat was recommended for the position. At Otey's suggestion Wheat accepted it and moved to Chapel Hill. According to Kemp P. Battle, the university historian, Wheat proved to be an active and energetic professor, and his family added "much to the social attractions of the village." Mrs. Wheat took an interest in ill students, often nursing them and even offering the university a corner of her own yard for the site of an infirmary. The trustees accepted her generosity, and a two-room, one-story cottage was erected in 1858 on that lot—located where Spencer Hall now stands—and universally called "The Retreat."

In June 1859 Wheat resigned as professor and as rector of the Chapel of the Cross in Chapel Hill to accept a call to Christ Church, Little Rock, Ark. During the Civil War, while cut off from his parish by the fall of Vicksburg in 1863, he was a chaplain in the Confederate army, serving principally in North Carolina. After the war he returned to Little Rock where he remained until 1867, when he accepted a call to a recently organized church in Memphis, Tenn. This church was formed from members of other Episcopal churches in the city who did not wish to worship in the presence of carpetbaggers, occupying troops, and others who went south after the war. Determined to organize another parish, they called upon the Reverend John Thomas Wheat to become its rector. St. Lazarus was the name chosen for the new church because as Jefferson Davis, one of its founders, said, "We, like Lazarus, were licked by dogs." Mrs. Davis, wife of the former Confederate president, went out to the women of the congregation, and on a Sunday shortly after Wheat arrived the alms basins were "heaped high with brooches, rings, bracelets, chains, and gifts from loved ones" and laid on the altar. Enough precious metal was given to make a communion service consisting of a chalice, a paten, and a flagon. This beautiful service was later given to Saint Luke's Church, Salisbury, as a memorial to Wheat.

In 1873 Wheat resigned his charge at St. Lazarus's and went into partial retirement. He soon moved to Salisbury to live with his daughter, Mrs. Francis E. Shober. In the next year and afterwards he planted churches in Berkeley, Calif.; Lewisburg, W.Va.; and Greensboro and Concord, N.C. During his long ministry he had the honor of being a delegate to six General Conventions of the Episcopal church. He was awarded the D.D. degree by the University of Nashville and published a pamphlet entitled Preparation for the Holy Communion (1866).

He died in Salisbury at the home of his granddaughter, Mrs. A. H. Boyden, and was buried from St. Luke's Church in the English Cemetery near the church. His wife died on Christmas Eve 1896.