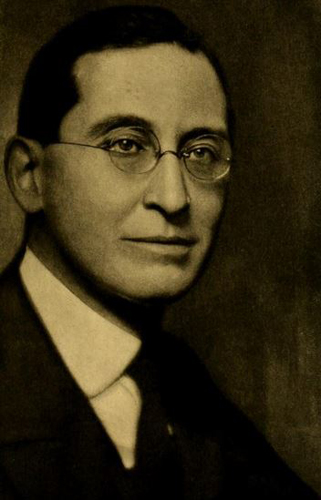 Leslie Weil, public-spirited merchant, county and state official, and university benefactor, was born in Goldsboro, Wayne County, the older son of Henry and Mina Rosenthal Weil. After attending the Goldsboro graded schools he entered The University of North Carolina, graduating with the Ph.B. degree in 1895. At Chapel Hill he was on the class football team, assistant editor of the Carolina Magazine, and a member of Phi Gamma Delta fraternity and the Philanthropic Assembly.

In 1896 Weil joined the family firm of H. Weil & Bros., becoming a partner in 1910. Following in the footsteps of his extended family, he assumed civic and community responsibilities: charter member and president of the Rotary Club (1923), member of the Elks and the Odd Fellows, president of the Goldsboro Chamber of Commerce (1917) and of the Goldsboro Citizens Building and Loan Association, director of the A. T. Griffin Manufacturing Company, director of the Farmers Cooperative Service and Exchange, and member of the executive committee of the Eastern Carolina Broadcasting Company.

Besides serving as president of the Oheb Sholom Congregation, Weil was a member of the National Hillel Commission and, in 1938, treasurer of the state organization to resettle Jewish refugees. After organizing the Tuscarora Council of Boy Scouts in 1923, he became a member of the interracial commission of the national Scout board. In 1936 he assumed the presidency of the National Association of Governing Boards of Land Grant Colleges.

Weil's loyalty to his alma mater continued throughout his life. He was a member of the board of trustees (1915–43), the Finance Committee (1920), and the Executive Committee (1923); assisted in founding The University of North Carolina Press, serving on its board; was both director and vice-president of the Alumni Association and chairman of the Alumni Fund; and, with other members of his family, established and endowed the annual Weil Lectures on American Citizenship. In 1926 the university annual, the Yackety Yack, was dedicated to him; in 1941 he was awarded an honorary LL.D. degree. Described by his fellow university trustees as having the "quality of quietness," Weil gave generously and inconspicuously of his business acumen, his enthusiasm, and his wealth, not only to the university but also to many individuals in need.