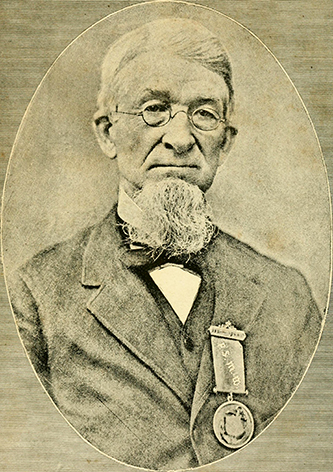 John Jordan Upchurch, founder of the Ancient Order of United Workmen, was born on a farm in Franklin County, one of four children of Ambrose and Elizabeth Hill Upchurch. After 1824, when his father was shot and killed by his wife's brother-in-law, Upchurch and his mother first lived with his grandfather Upchurch and then on a small farm purchased by his grandfather Hill. He received a limited education "as the opportunity offered." In 1837 he left the farm to learn the trade of millwright but gave it up because he was too frail. Subsequently, he was apprenticed as a carpenter but again discovered that he was not strong enough for the occupation and took employment at Henderson as a clerk until 1841.

On 1 June 1841 Upchurch married Angelina Zeigenfuss Green, a Pennsylvanian, the niece of John Zeigenfuss. About the same time, Zeigenfuss and Upchurch opened a hotel in Raleigh. Under the influence of the temperance movement, they converted it into what Upchurch called "the first temperance house" south of the Mason-Dixon Line. When business fell off, they had to close the hotel, and Zeigenfuss went back to Pennsylvania in 1844. In the meantime, Upchurch had learned to be an engraver and a silversmith and briefly operated an engraving shop. Leaving Raleigh in late 1845, he was unsuccessful in finding suitable permanent employment. For a brief period, he acted as a horse tamer and horse trader in Georgia, South Carolina, and North Carolina and accumulated resources with which to support a move to Pennsylvania in October 1846.

There Upchurch took a job first with the Philadelphia and Reading Railroad and later with the Catasauqua Iron Works. Still later he went to work for the Mine Hill and Schuylkill Haven Railroad, where he remained for thirteen years as foreman and master mechanic. In June 1864, when train workers struck after management refused to meet their demands, Upchurch ran the railroad with men provided by the War Department. Two weeks later the strike was broken. Concluding that the strike was not in the best interest of workers, Upchurch determined to develop a system that would harmonize the interests of capital and labor. In January 1865 he became involved in an unsuccessful venture with an oil company. He went to Alabama in 1866 to work with a railroad company but soon moved back to Pennsylvania because of his health. After holding two short-term jobs in Pennsylvania, he took a position with the Atlantic and Great Western Railroad in Meadville, Pa., in April 1868.

At Meadville Upchurch joined the League of Friendship, Supreme Mechanical Order of the Sun. The Meadville lodge soon split, and Upchurch took the lead in organizing Jefferson Lodge No. 1 of the Ancient Order of the United Workmen on 27 Oct. 1868. Objectives of the order were to "create and foster a more friendly and cooperative feeling" among those who had a common interest and to use all possible "legitimate means" to adjust differences that might arise between employers and employees. Strikes were to be countenanced only when "absolutely necessary." In addition, the order was authorized to provide life insurance for members. A year later, when a per capita assessment of one dollar was levied to pay death benefits to members, the order was transformed into a fraternal benefit society that became a model for other similar societies. After early dissension in the AOUW unity was attained in 1873, and Upchurch was named past supreme master workman. Growth of the AOUW and other fraternal societies was stimulated by the need of workers for aid in the payment of expenses related to sickness, old age, and death. Because of his association with the AOUW, Upchurch is generally regarded as the founder of the mutual benefit system, which by 1919 included two hundred fraternal societies in the United States and Canada with some 9 million members. Throughout the country he was greeted as "Father" Upchurch and hailed as a benefactor.

In 1873 Upchurch moved to Missouri and worked for a number of employers until 1881; from 1881 to 1887 he apparently had no regular employment. While making an extensive tour of the West in 1885, he was introduced as the founder of "poor man's insurance, the widow's support, and the orphan's help." In 1886 he made a similar tour in the East including visits to Boston and Philadelphia. In Philadelphia he said that the AOUW had done more to cure poverty and degradation than any other group. His autobiography, Life, Labor, and Travels of Father J. J. Upchurch, was edited and published after his death.

Upchurch was the father of fifteen children, eleven boys and four girls. Throughout his life he had difficulties because of his large family, ill health, and irregular employment. He died at Steelville, Mo., and was buried at Bellefontaine Cemetery, St. Louis.

Life, Labor, and Travels of Father J. J. Upchurch, Founder of the Ancient Order of United Workmen, Written by Himself (1887).

Arthur Preuss, comp., A Dictionary of Secret and Other Societies (1924).

Greetings! I am editor of

Greetings! I am editor of the Upchurch and Allied Families Newsletter. www.alliedfamilies.com. A non-profit genealogy organization. May I reprint your article on John Jordon Upchurch. I think it would be interesting to our association. All credits will be attributed accordingly. Our readership is approximately 1000. Thank you for considering my request.

This comes from a published source and you will need to get permission from publishers at https://uncpress.org/subsidiary-rights/.