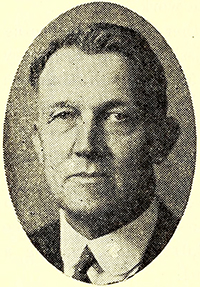 John Clyde Turner, Baptist minister, scholar, and author, was born in Iredell County, the son of John and Nancy Tuck Turner who were of English descent. He first attended the three-month annual sessions of Ebenezer Academy, where the students ranged in ages from six to twenty-one years. The school's emphasis on writing the beautiful Spencerian style, strict discipline, a thorough mastery of Webster's Blue-Backed Speller, and arithmetic fundamentals laid a sound foundation for his later advances in education. When Clyde Turner was nine, his father was elected treasurer of Iredell County and the family moved to Statesville, where the boy attended the city school.

In 1899 he received the A.B. degree from Wake Forest College. At the end of his senior year he was awarded the valedictory by his class and was the featured anniversary orator for the Euzelian Literary Society, two of the most coveted honors bestowed upon any graduating senior. Also a popular athlete, he was catcher for the college baseball team in his final year. His avid interest in Wake Forest College sports continued until his death.

Turner taught in the Durham High School for three years (1899–1901) and was an instructor at the Oxford Masonic Orphanage for one year (1901–2). In 1902 he enrolled at Southern Baptist Theological Seminary, in Louisville, Ky., where he received the Th.M. degree in 1905. While at the seminary he was a student pastor of the Baptist church at Fisherville, Ky. (1902–5). Thereafter he was pastor of the First Baptist church at Newport, Ky. (1905–7) and minister of Tattnall Square Baptist Church in Macon, Ga. (1907–10).

Turner's most illustrious pastorate was his thirty-eight years of service in the First Baptist Church in Greensboro, N.C. (4 Dec. 1910–48). There he demonstrated a brilliant ability in church finance, offering sound business judgment and assisting the congregation in clearing its overwhelming monetary obligation in seven years. He gave generously himself and insisted that the church should appropriate as much to benevolence and missions as it did to local expenses. The Greensboro church was the state's largest contributor to the mission program of Southern Baptists. Even during the depression years of the thirties, it could be counted on for its unmatched stewardship. Turner was a dynamic preacher and developed a strong religious educational program at the church, which experienced a phenomenal growth both in membership and in spiritual depth while he was pastor. Under Turner's leadership the First Baptist Church was instrumental in founding many other churches in the North Carolina Piedmont and was fondly known as the "Mother of Churches."

A participant in important local civic affairs, Turner remained sensitive to the activities of the Baptist denomination in spite of his ninety-five years. He was respected as the "Grand Old Man" of the ministry, leaving a significant list of accomplishments. He served with distinction as president of the North Carolina Baptist State Convention for four terms (1929–32); as a trustee of the Southern Baptist Theological Seminary for twenty-five years, two of which as chairman of the board; and as a trustee of Wake Forest College for twenty-five years. Turner wrote six books. These Things We Believe, the basic doctrinal text of more than 12 million Southern Baptists, was perhaps the most noteworthy. He also was the author of Soul-Winning Doctrines, The Gospel of the Grace of God, Our Baptist Heritage, The New Testament Doctrines of the Church, and Century of Service: A History of the First Baptist Church, Greensboro, N.C.

He married Bertha May Hicks of Raleigh (30 May 1873–5 Nov. 1962). An able Bible scholar and Sunday school teacher, she also made significant contributions as president of the Woman's Missionary Union of North Carolina for seven years. The Turners had no children of their own, but they maintained an interest in the adolescent age and lived vicariously in the youth programs of their church.

He died in Raleigh and was buried in Oakwood Cemetery. A dual portrait of Dr. and Mrs. Turner is in the First Baptist Church, Greensboro.

J. Clyde Turner, The New Testament Doctrine of the Church (1951).