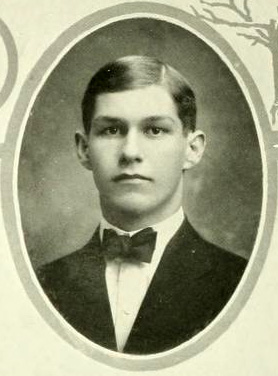 Edgar Willis Turlington, lawyer, was born in Smithfield, the son of Ira Thomas and Hortense Mary Rose Turlington. After graduation from The University of North Carolina in 1911, he became a Rhodes Scholar at Oxford (1911–14), receiving M.A. and B.C.L. degrees in 1914 after having attained first class honors in the School of Jurisprudence in 1913. Returning to Chapel Hill, he was a graduate student in 1915–16 and an instructor in Latin and English in 1915–17. Turlington then joined the Department of State, where he was a special assistant (1917–20); assistant solicitor (1920–25); legal adviser to the American delegation at the Conference on Near Eastern Affairs at Lausanne and to the American high commissioner in Constantinople (1923); assistant chief, Division of Near Eastern Affairs (1925); legal adviser to the American ambassador in Havana (1930–32); chief counsel, Mexican Claims Commission (1935–38); member of the advisory commission, Harvard Research in International Law (1935–42); and chairman, District of Columbia branch, Commission to Study the Organization of Peace (1944–45).

In 1947 he became a partner in the law firm of Peaslee and Turlington, in Washington, D.C., where he was a member of the Alabama and District of Columbia bar and was licensed to practice before the Supreme Court. He was active in numerous professional organizations, societies, and councils and was the author of two books: Mexico and Her Foreign Creditors (1930) and Neutrality: The World War Period (1936).

Turlington married Catherine Isabel Hackett in 1926, and they had three daughters: Sylvia, Ellen Rigby, and Barbara. Early in life he was a Presbyterian but became a Unitarian.