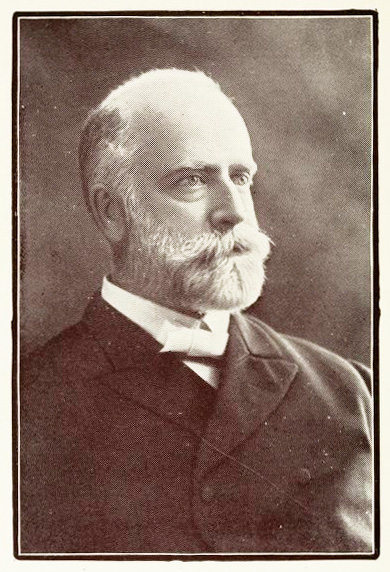 Reuben Archer Torrey, evangelist, author, and Fundamentalist, was born in Hoboken, N.J., the son of Reuben Slayton and Elizabeth Ann Swift Torrey. He was graduated in 1875 from Yale University, where he also received a divinity degree. As a liberal theologian he was a pastor in Garrettsville, Ohio, but left to study theology at Leipzig and Erlangen, Germany. Unlike others who became even more liberal in German universities, Torrey returned home more conservative. In the 1880s he took up pastorates in Minneapolis and contributed to the Fundamentalist foundations soon to be built upon by W. B. Riley and later by Riley successor Billy Graham.

In Minneapolis Torrey came to the attention of Dwight Moody, who invited him to Chicago in 1889 to be the first superintendent of Moody's Chicago Training Institute—later called the Moody Bible Institute—which had been cofounded by Asheville's W. J. Erdman. In 1894 he also became pastor of the Chicago Avenue Church, later Moody Memorial Church. When Moody became too ill to continue his Kansas City revival, he asked Torrey to complete it. In 1902 Torrey took the Fundamentalist movement worldwide when he succeeded the late Moody on a preaching tour to Australia, New Zealand, Tasmania, India, China, Japan, England, Scotland, Ireland, Germany, and France.

Even earlier Torrey had begun to influence Tar Heel thought when in June 1896 he addressed the Southern Students' Conference, attended by a number of North Carolinians. By 1900 he was a familiar figure in North Carolina, in part through attendance at the annual Montreat Bible Conferences in Black Mountain. Begun in 1897, these meetings were modeled in part on Tar Heel James H. Brookes's Fundamentalist Niagara Bible Conferences in which Torrey played a supporting role. Torrey's addresses at Montreat were circulated in North Carolina and the Southeast through Weston R. Gales's The Revival, a premillenial prohibitionist promotional periodical published at Montreat. Torrey established a conference center in Pennsylvania but in 1926 settled in Asheville and continued his work from there.

His published addresses accented the fundamentals of his faith, especially creationism, the second coming of Christ, and an inerrant Bible. One North Carolinian whom Torrey influenced was Salisbury's young First Baptist prohibitionist pastor, Ralph E. Neighbor, who later was one of the founders of the Fundamentalist Baptist Bible Union and of the northern separatist General Association of Regular Baptist Churches. When Torrey's ministry became worldwide in scope, he took with him as his song leader and associate a Moody Bible Institute musician, Charles Alexander, who had introduced Moody's millenarian message to Marshall, Bryson City, Waynesville, and the Cherokee Indian reservation at least a decade earlier than Torrey advanced it at Montreat.

Torrey's influence in North Carolina was not restricted to Montreat, subscribers to The Revival, or North Carolinians attending Princeton Seminary who heard him speak when university president Woodrow Wilson reluctantly permitted him to preach to the student body. Torrey succeeded Amzi Dixon, a Shelby native and world renowned evangelist, as editor of a series of booklets subsidized by a wealthy Californian to accent Fundamentalism. Between 1910 and 1915 thousands of booklets entitled The Fundamentals were sent to pastors, Sunday school superintendents, and others throughout North Carolina. The state's 1920s conflict over the teaching of evolution was one of the fruits of this activity.

From 1912 to 1924 Torrey became involved with the Bible Institute of Los Angeles, patterned after his own Moody Bible Institute. Torrey was dean of the Los Angeles institute, where he and Amzi Dixon delivered annual lectures. The new medium of radio was adopted and in time produced "The Old Fashioned Revival Hour," to which young Billy Graham listened in Charlotte and through which Jerry Falwell was converted in Virginia.

It was when he left California in 1926 that Torrey chose Asheville as his retirement home. He then conducted revivals at the First Presbyterian Church and around North Carolina and the Southeast. Torrey married Clara B. Swift of Ohio, and they had five children: Edith Clare, Blanche, Reuben Archer, Elizabeth, and Margaret.