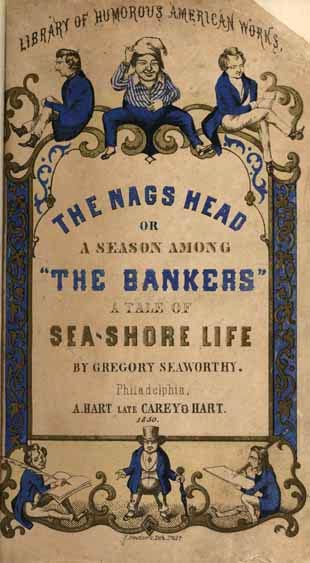 George Higby (Gregory Seaworthy) Throop, schoolmaster and novelist, was born in Willsboro, N.Y., the youngest of six children of George Throop, Sr., a manufacturer and storekeeper. His mother, the elder Throop's second wife, died soon after his birth. He was named Higby but eventually appropriated his father's given name and relegated his own to a middle initial. A student of the classics and an avid reader of literature, he attended the University of Vermont at Burlington in 1835–36 and afterwards possibly another college. After an unhappy marriage that was soon broken up, he spent a number of years during the 1840s working as a schoolmaster and mariner, occupations reflected in his later fiction.

In 1849, and perhaps earlier, Throop's career as an itinerant schoolmaster brought him to the Coastal Plains of North Carolina, an area that stirred his greatest creative achievements. He may have taught first at a plantation near Hertford, but it is certain that at least from March until October 1849 he taught at Scotch Hall, the plantation of Cullen Capehart near Merry Hill in Bertie County. During the hot months he accompanied his pupils, their family, and their servants to the Capeharts' summer home at Nags Head. His sojourn in North Carolina may have been the happiest of his sad life.

After his brief but stimulating residence with the Capeharts, Throop ostensibly spent a few years in Philadelphia overseeing the publication of his three novels. Under the nom de plume "Gregory Seaworthy," he first brought out a book that he wrote while still living in North Carolina: Nag's Head; or, Two Months Among "The Bankers": A Story of Sea-Shore Life and Manners (1850). Published by A. Hart of Philadelphia but with the dedication page signed from "Merry Hill, Bertie County, N.C.," this book may be loosely termed a novel but is more accurately a memoir, in the guise of fiction, of the author's summer on the Outer Banks. Although devoid of plot and sustained characterization, it captures the spirit of a mid-nineteenth century seashore holiday and offers revealing glimpses of the coastal area, its lore, and its inhabitants. Nag's Head also represents the first novel concerned with contemporary times in North Carolina.

Although his first literary effort did not receive much attention, Throop was so encouraged by a letter from Washington Irving expressing interest in the book and by a few other favorable notices that he soon completed another work. With a dedication letter dated 15 Dec. 1850 in Philadelphia and using the same pseudonym and publisher as before, he brought out this second work the following year: Bertie; or, Life in the Old Field: A Humorous Novel (1851). Set chiefly at "Cypress Shore" in North Carolina, in reality the Capehart plantation on the banks of Albemarle Sound, this remarkably good-humored novel deftly intertwines several romances against a background of antebellum plantation life. Far more sophisticated than Nag's Head in plot and characterization, Bertie ranks as a masterpiece of nineteenth-century North Carolina fiction and was called by a Godey's Lady's Book reviewer" one of the best American novels of its day." Like its predecessor, however, it was largely ignored by literary critics and the general public.

In Philadelphia the next year Throop signed the preface for his third book, Lynde Weiss (1852), a strongly autobiographical novel published by Lippincott, Grambo and Company under his own name. But this work contains no references to North Carolina.

Throop's efforts as an author brought him little fame and no fortune, however, so the luckless wanderer rambled on to wherever he could find employment as a schoolmaster. In 1853 he spent some time in Georgia, but prior to the Civil War he settled in Hampshire County in what became eastern West Virginia.

In West Virginia, though a well-liked teacher and an accomplished singer and composer of lyrics and tunes, Throop lived out his days in obscurity and poverty, debilitated by alcoholism. Around 1888, when he could no longer teach, he learned of a previously unknown son, Edward H. Palmer, of Boston, who had taken the name of his stepfather. Palmer provided an allowance of twenty dollars monthly, which supported Throop as a boarder in the homes of various citizens of Bloomery, the site of his last teaching assignment, until his death. He was buried in the Presbyterian Church cemetery on Bloomery Run, where his grave was finally marked in August 1955 by the Pioneer Teachers Association of Hampshire County, W.Va.

Richard Walser, Introduction to a facsimile reissue of Nag's Head and Bertie (1958) and "The Mysterious Case of George Higby Throop (1818–1896). or, The Search for the Author of the Novels Nag's Head, Bertie, and Lynde Weiss," North Carolina Historical Review 33 (1956).