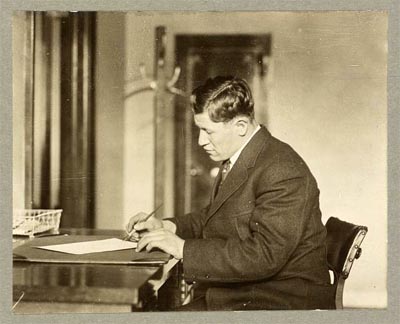 James Francis Thorpe, perhaps the greatest performer in the history of sport, spent the summers of 1909 and 1910 in North Carolina as a baseball player in the Eastern Carolina League. As a result of his participation, first with the Rocky Mount Railroaders and later with the Fayetteville Highlanders, he was forced, in January 1913, to forfeit the many awards he had won during the summer of 1912 in the Olympic competition held in Sweden. Despite the petitions of hundreds of thousands of people throughout the world, as well as the commonly held belief that Thorpe played Carolina baseball not for financial gain but for love of competition, the awards are today not in the possession of his heirs and his name does not appear in official Olympic records.

A descendant of Black Hawk, the Sac and Fox warrior from whom the Black Hawk War of 1831–32 derived its name, Thorpe was born in a cabin in Indian territory near the present city of Prague, Okla. He was educated at four institutions: two schools near his birthplace, Haskell Institute, and the U.S. Indian Industrial School (commonly known as the Carlisle Indian School). At the Pennsylvania school, which he entered in 1904, he gained fame in a variety of sports; in football he earned All-American honors in 1908, 1911, and 1912. The 198 points that he scored in 1912 remain the highest total ever amassed by a college player in a single season.

In July 1912, representing the United States, he easily won the pentathlon and the decathlon track and field events in Olympic competition—the lone athlete ever to triumph in both. After the loss of his awards six months later, he left Carlisle to sign a baseball contract with the National League's New York Giants, for which he performed during most of his ten-season professional baseball career (1913–22). As a major league outfielder and first baseman, he compiled a batting average of .252 during six seasons of play. In 1915 he embarked on a fifteen-year career in professional football, starring for a number of teams including the Canton Bulldogs, New York Giants, and Oorang Indians. In 1920 he was president of the American Professional Football Association, forerunner of the National Football League.

After his retirement from professional athletics in 1929, Thorpe enjoyed little prosperity. He worked in a variety of jobs—among them as movie actor, master of ceremonies, and day laborer—but none brought him financial success or security. In 1945 he entered the Merchant Marines and spent the duration of World War II serving his country. In 1950 the Associated Press voted him both the outstanding football player and the outstanding male athlete of the half century, and in 1951 Warner Brothers starred Burt Lancaster in the role of Jim Thorpe—All-American, a much-publicized motion picture.

Following difficulties with alcohol, heart ailments, and cancer, he succumbed to a heart attack in Lomita, Calif. His third wife, present at his death, subsequently arranged for his body to be transported to the city of Jim Thorpe, Pa., where an impressive tomb marks his resting place. In death, as in life, he remains a charismatic legend without peer in the annals of sport.