Singer-songwriter James Taylor was born in Boston, Massachusetts in 1948 to Gertrude and Isaac Taylor. Taylor’s family moved to Chapel Hill, North Carolina when he was three years old. His father served as the Dean of the University of North Carolina at Chapel Hill medical school from 1964 to 1971.Taylor grew up playing music with his four siblings, Alex, Kate, Livingston, and Hugh.

Taylor’s childhood home was on Morgan Creek Road in Chapel Hill-Carrboro. In April, 2003, a bridge over Morgan Creek was dedicated to the musician, and renamed the James Taylor Bridge. Taylor’s childhood experiences in this neighborhood heavily impacted many of the lyrics in some of Taylor’s most popular songs. “Copperline” tells the story of Taylor’s return to his childhood stomping grounds, where it was just a ‘half a mile down to Morgan Creek’, and is now ‘all spec house and plywood’. “Carolina in My Mind”, Taylor’s “tribute song to his home state” is “known and loved by countless Carolinians.”[i]

In an interview in 2000, Taylor told The Charlotte Observer,"What I remember most about Chapel Hill is the landscape. I tell my kids that we were pre-TV and there was a lot of empty time there, slow weekends when you just walked into the woods and found whatever you could to kill time. There was this long, uninterrupted time to let your imagination grow. I believe that was an important part of whatever creative life I've had."[ii]

It wasn’t until he left for boarding school at Milton Academy in Massachusetts that he began experimenting with writing his own music. He experienced severe depression being so far from home and briefly returned to North Carolina, where he attended Chapel Hill High School. During this time, Taylor formed a band called the Fabulous Corsairs with his brother Alex and three friends in the mid 1960’s, but then returned to Milton Academy to finish school. After voluntarily committing himself to McLean Psychiatric Hospital in Belmont, MA to treat his severe depression, Taylor moved to New York City after his release. 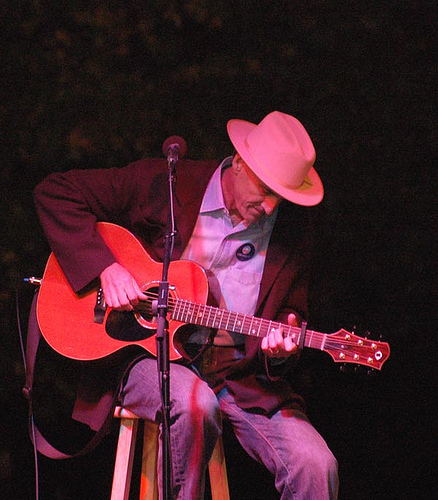 While in New York City, Taylor formed the band The Flying Machine, although the band did not stay together long. Taylor then moved to London, where he impressed Peter Asher of Apple Records with his demo tapes. In London, Taylor recorded his debut self-titled album James Taylor (1968), and then moved to Los Angeles to record Sweet Baby James (1970). Sweet Baby James brought Taylor worldwide fame and success as it achieved triple platinum status. This album was nominated for the Album of the Year Grammy Award, and established James Taylor as a respected musician.

James Taylor has earned over forty gold, platinum, and multi-platinum awards throughout his career.Taylor’s third album, Mud Slide Slim and the Blue Horizon (1971), won a Grammy for Best Pop Male Vocal for the song “You’ve Got a Friend” in 1971. Joni Mitchell, Taylor’s girlfriend at the time and popular folk musician, helped record background vocals on this album. Taylor married Carly Simon in 1972 before the release of One Man Dog (1972), which included background vocals from Simon, songwriter-songwriters Carol King and Linda Ronstadt. He also recorded Walking Man (1974), Gorilla (1975), In the Pocket (1976), and JT (1977), which received a Grammy for Best Male Pop Performance for the song “Handyman.” In 1978, Taylor collaborated with Paul Simon and Art Garfunkel to record “Wonderful World” for Garfunkel’s record. Following the releases of Flag (1979) and Dad Loves His Work (1981), Taylor and Simon divorced in 1983. He married Kathryn Walker in 1985. This was followed by the release of Never Die Young (1988) and New Moon Shine (1991). In between New Moon Shine and Hourglass (1997) which won a Grammy award for “Best Pop Album”, Taylor divorced from Walker in 1995. In 2002, he released October Road.

Through his career, Taylor has received many awards, including honorary doctorates of music from Williams College and the Berklee School of Music.

Below are some other notable achievements throughout Taylor’s musical career:

1978: Nominated for a Tony Award with seven others for Best Score for the Broadway musical "Working."

1994: Earned the Recording Industry Association of American’s Diamond Award for his Greatest Hits Volume 1album for selling over 10 million records

1998: Won Billboard’s Century Award for his distinguished achievement in the arts

2006: Designated Person of the Year by MusiCares; Won a World Soundtrack Award for Best Original Song Written for Film, which was written for the animated film Cars.

2007: Received Emmy nomination for Outstanding Variety, Music, or Comedy Special for his album One Man Band

Throughout his career, Taylor has made many television appearances, including: “Late Show with David Letterman, CBS This Morning, The Tonight Show, Sesame Street, and Saturday Night Live, among others.

James Taylor has been actively involved in political campaigning since the 1970’s, when he supported Jimmy Carter’s presidential campaign in 1976, and campaigned four years later for John Anderson in 1980. In 2008, he returned to North Carolina to perform a series of concerts to campaign for Obama's presidential election campaign. Taylor played in Charlotte, Asheville, Chapel Hill, Raleigh, and Wilmington to support Obama.

Taylor married Caroline “Kim” Smedvig in 2001, and together they have two sons, Henry and Rufus. He also has two children, Ben and Sally, from his previous marriage to Carly Simon. Taylor currently lives in Massachusetts with his family.

James has always been my

James has always been my favorite singer. Didn't know till I was older that some of his family lived in my hometown of Morganton N.C. Meet his cousin Livingston Vernon who told me he had never heard his cousin sing and wanted me to bring some of his music for him but never got to.

Best article with so much

Best article with so much information about our favorite James Taylor! We live near the James Taylor Bridge, and walked Morgan Creek on the new path to the Meadow where James lived. Amazing that all these years, we have been fans of JT, seeing him numerous times in Tanglewood, Boston, Foxboro, then most recently with Carole King at Mohegan in CT., and now we live minutes from his childhood home. We love Sweet Baby James, and we "Shower the People" every day, and someday, hope to find Copperline!