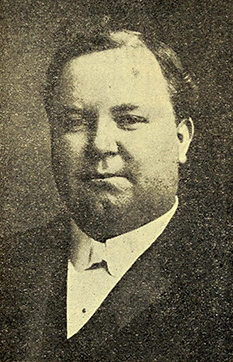 Bernard Washington Spilman, Baptist clergyman and denominational Sunday school executive, was the fourth of five children born to Bushrod Washington and Helva Roxanna Barham Spilman, of Weldon. Of German ancestry, the elder Spilman had become a fairly prosperous merchant and farmer after moving to Weldon from his native Westmoreland County, Va.

Spilman was given instruction in the homes of various local teachers, at the Garysburg Academy, and in a public school in Wilson prior to his matriculation in the Horner School at Henderson in 1884. Two years later he transferred to the Littleton High School, a private institution operated by Professor LeRoy W. Bagley. He enrolled at Wake Forest College in the fall of 1887 and received a B.S. degree in 1891. He was awarded honorary doctor of divinity degrees by Stetson University (1911), Baylor University (1920), and Wake Forest (1921).

Upon his graduation from Wake Forest, Spilman assumed the pastoral care of the Smyrna, Davis, and Woodville churches in Carteret County, supplementing his meager salary by teaching school. By late summer of 1892 he had saved enough money to begin theological studies at the Southern Baptist Theological Seminary in Louisville, Ky. However, he was unable to complete the two-year course because of illness, which necessitated his missing final examinations and his return to Weldon in the summer of 1894. Thereafter, he supplied churches in Smyrna and New Bern before assuming the pastoral care of First Baptist Church, Kinston, on 1 Jan. 1895.

Spilman remained with the Kinston church for only fifteen months before entering upon the occupation that would engage his time, talents, and energies for the next forty-five years. In early 1896 he was elected the first Sunday school missionary for the Baptist State Convention of North Carolina—a position that found him visiting churches and associational meetings throughout the state in behalf of his ultimate goal of a "well-equipped, well-organized Sunday School, open fifty-two Sundays a year, in every church in every community in North Carolina."

The thoroughness of his work, together with his readiness to utilize innovative methods, attracted the attention of the Sunday School Board of the Southern Baptist Convention. In June 1901 Spilman was named field secretary of the board—a post that he filled until his retirement in 1940. By the end of his first year with the board, he had designed a four-point plan of action, the objectives of which were to guide his ministry throughout his remaining career. The objectives envisioned the appointment of Sunday school promotional secretaries within each of the affiliated Baptist State conventions; employment of additional staff personnel to assist with the work of the Sunday School Board, especially with the travel involved in the successful promotion of Sunday School work; development of a comprehensive teacher training program for Sunday school workers; and the establishment of a series of state Sunday school assemblies—similar to the chautauquas that he had helped sponsor in North Carolina—headed by a general southwide assembly that would serve the entire denomination. Later he was given the special assignment of encouraging the teaching of religion in southern colleges and universities.

By the time he left the Sunday School Board, Spilman had witnessed significant progress towards the realization of his goals. He had initiated the first Sunday school training course for the denomination with his Normal Studies for Sunday School Workers, published in 1902. Moreover, he was primarily responsible for the founding of the Ridgecrest Baptist Assembly (now Ridgecrest Baptist Conference Center) in 1907, serving successively as manager, general secretary, and president of the assembly's board of directors until 1933. In addition, he was an early and staunch supporter of the Baptist Student Movement throughout colleges and universities in the South.

A popular lecturer to church, civic, and student groups, Spilman was also a prolific writer. Besides serving as lesson writer for various periodicals published by the Sunday School Board, he wrote numerous articles and pamphlets—many of which first appeared in the denominational press. Among the books of which he was author or coauthor were Convention Normal Manual for Sunday-School Workers (1909); The New Convention Normal Manual (1913); A Study in Religious Pedagogy, Based on Our Lord's Interview with the Woman of Samaria (1920); The Sunday School Manual (1923); The Mill's Home: A History of the Baptist Orphanage Movement in North Carolina (1932); and Yesterday Greets Tomorrow (no date).

Spilman married Agnes Mozelle Pollock of Kinston on 24 Jan. 1900, and they had two children: Raymond Pollock, who died in infancy, and Agnes, who died at birth. Mrs. Spilman died on 16 Nov. 1928. On 12 Aug. 1939 Spilman married Esther Harrell Ward of Kinston.

A portrait of Spilman hangs in Pritchell Hall, the administrative building of the Ridgecrest Baptist Conference Center, Ridgecrest. His remains were interred beside those of his first wife in Maplewood Cemetery, Kinston.