William Ruffin Smith, planter, was born in Halifax County, the youngest son of Arthur and Anne Ruffin Smith. He was the father of Richard Henry Smith and the grandfather of Peter Evans Smith. Inheriting a small farm from his father, William R. Smith became a successful farmer and by the time of his death had accumulated a large estate in land and slaves. Prominent on a local level, he at times served as a justice of the county court, a trustee of the Vine Hill Academy, and an original member of Trinity Church, Scotland Neck. In his lifetime, the Roanoke River valley in North Carolina was the horse breeding center of the nation. Smith was an active member of the Greenwood Jockey Club and owned and bred the horses Collector, Jack, and Sir Harry, and the mare, Roxanna, got by the famous Sir Archie. He died and was buried in Old Trinity Cemetery, Scotland Neck.

About 1801 he married Sarah (Sally) Walton Norfleet, one of the four daughters of James Norfleet of Gates County. They were the parents of four sons, William, Richard, James, and Robert Arthur, and two daughters, Sarah and Elizabeth. Sarah married James L. G. Baker, the son of Dr. Simmons Baker. Elizabeth and Robert Arthur never married. 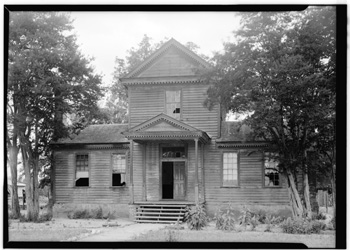 In 1834 William R. Smith bought a house in Scotland Neck with notable architectural features that had been built by Lewis Bond in 1808. After his death, his widow Sally continued to reside there for many years. Known as Sally Billy to distinguish her from other women with the same first name in the family connection and neighborhood, her home was referred to locally as the Sally Billy house. In 1972 Charles Herbert Hale of Scotland Neck, who then owned the property, donated the house to the Historic Halifax Restoration Association. The building, retaining the name of the Sally Billy or William Ruffin Smith House, was moved to the town of Halifax in 1975 and restored by the state as part of the Halifax Historic Site. The North Carolina Daughters of the American Revolution, under the leadership of their state regent, Mrs. John B. Macleod of Chapel Hill, took over the furnishing of the dwelling as the project for the bicentennial year.