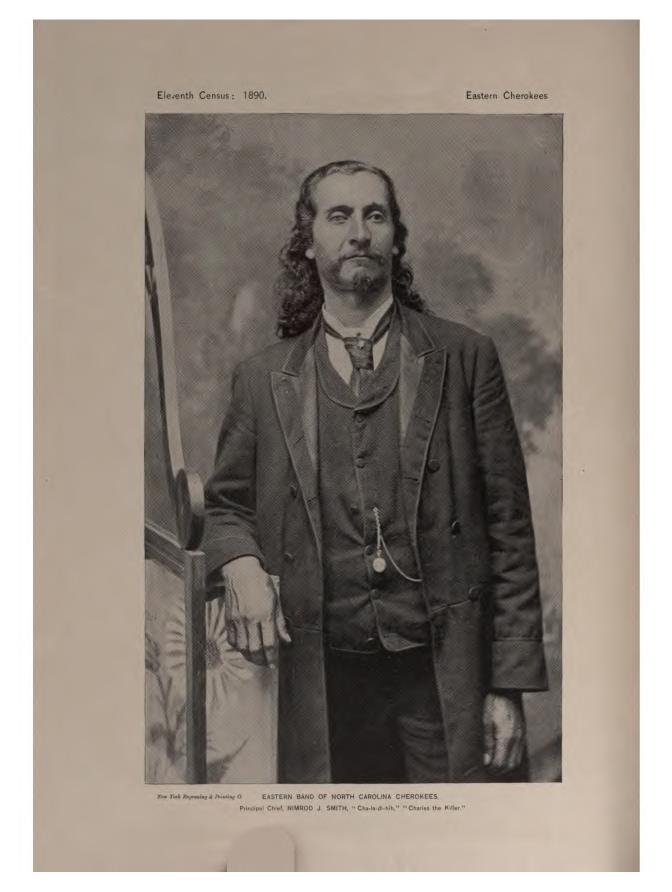 Named Tsa-la-di-hi for Jarrett, Nimrod Jarrett Smith was born near present day Murphy in 1837 at the height of the Cherokee removal. His father, Jarrett Smith, had been an interpreter for Evan Jones at the Valleytowns Baptist Mission. Little is known about the early life of Nimrod Jarrett Smith. He was raised around the Valley Town and Cheowa Cherokee communities, but was also well acquainted with William Holland Thomas and the Oconaluftee Cherokees. At 25 he enlisted with Thomas’s 69th NC Volunteer Infantry, also known as the “Thomas’s Legion”, and rose by 1865 to the rank of 1st Sergeant of Company B.

Smith was deeply involved in post-Civil War Cherokee politics. During this pivotal time, the North Carolina Cherokees sought not only to solidify their land holdings, but also their very existence in the state. At a Grand Council held at Cheowa (modern day Robbinsville) on December 9, 1868, the body politic of the Eastern Band of Cherokee Indians (EBCI) was created.

Sometime between 1870 and 1880, Smith moved to a farm he called “Yellow Hill,” located in the Yellow Hill community of the Qualla Boundary. Upon being elected Principal Chief, Smith centralized Cherokee politics around his farm in modern-day Cherokee. While Qualla Town remained the local post-hamlet for the area, Chief Smith merged the various township Council Houses into a centralized location. In close proximity to Smith’s frame house, the EBCI constructed a building that functioned as school house, meeting house, and Council House.

Throughout his tenure as Principal Chief, Smith pursued an education system with North Carolina Quakers, who constructed an industrial school and common school in the emerging compound at Yellow Hill. He also fought for Eastern Band legal participation in Cherokee treaty rights and privileges with the federal government. A location near his residence was selected as a base of operations for the first official United States Agent to the EBCI in 1882. Although remembered for the centralization of tribal government, the most critical initiative undertaken by Chief Smith was gaining North Carolina’s recognition of the Eastern Band of Cherokee Indians as a corporate, body politic, which became law on March 11, 1889.

Smith served as Principal Chief until 1891. Described as a man of imposing stature, Chief Smith was a staunch Democrat, often involved in politics beyond the Qualla Boundary. He spent a great deal of time working at his own expense on behalf of the EBCI in Washington. He was also a Master Mason in good standing at the Ocona Lodge. Shortly before his death, Smith was asked about the Cherokee Removal and, smiling graciously, responded, “As we were at home, I think the victory might have remained with us.” Chief Smith died on August 2, 1893, and was buried in the Welch Cemetery, Cherokee, with full Masonic rights and honors.

Ramp, A. T. 1892. The wagonauts abroad. Two tours in the wild mountains of Tennessee and North Carolina, made by three kegs, four wagonauts, and a canteen. In two parts. Nashville, Tenn: Southwestern Pub. House.