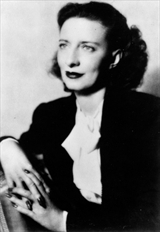 Betty Smith, playwright and novelist, born in the Williamsburg section of Brooklyn, N.Y., was apparently named Elizabeth Lillian Wehner, though some say "Sophie." She used "Elizabeth Lillian" from earliest childhood, and her mother's pet name for her was "Littie." Later, when she needed a birth certificate to quality for social security, the only one that fit the circumstances of her birth was for a Sophie Wehner. She was able to have the certificate changed legally to Elizabeth Wehner, or so she said. She was the oldest child of John Casper Wehner (1873–1913) and Catharine Hummel Keogh Wehner (1876–1966), both born in Brooklyn. All four grandparents—Regina and John Casper Wehner, Sr., and Mary and Thomas Hummel—were born in Germany. Apocryphal accounts of Betty Smith's "Irish ancestry" have arisen from the fact that after her father's death, her mother married an Irishman, Michael Keogh, a widower with young children. Betty's sister Regina (Mrs. William Hall) and a brother William, both Wehners, took the name Keogh, though Betty, being older, never did. "Williamsburg was a poor and sordid neighborhood," she wrote, "but picturesque . . . with children of Irish, German, Italian, and Jewish immigrants. We all fought to retain our own . . . speech patterns. . . . A cohesive Brooklyn accent resulted." Later, beneath the southern modulations her voice acquired, "Brooklynese" still emerged sporadically.

Early jobs interfered with schooling, and Betty advanced only through the eighth grade. In Ann Arbor she completed the equivalent of high school but was never awarded a diploma, nor did she earn a college degree. Admitted to the University of Michigan as a special student, she took every writing and journalism course. As part of class work, she wrote weekly articles for the Detroit Free Press . Her work also appeared in the New York Herald Tribune , the Chicago Tribune , and The Chatelaine , a Canadian magazine, and she published two plays. Given a "special dispensation" to compete, she won the Avery Hopwood Award in playwriting in June 1931 worth $1,000 and obligating its recipient to continue work in the drama. To fulfill this requirement, she was admitted by George Pierce Baker to take the three-year course in Yale Drama School without being a degree candidate. She and Elia Kazan were among thirteen known as "Baker's Dozen." Afterwards, she got a job with the Federal Theater and was sent with Robert Finch and others to Chapel Hill to work with Frederick H. Koch of the Carolina Playmakers.

In 1937 she coedited, with Koch and Finch, Plays for Schools and Little Theatres and wrote a one-act play catalogue. Having her two children with her and being estranged from her husband (from whom she was divorced in 1939), she stayed on when the federal project expired. Through the good offices of friends she was granted a Rockefeller fellowship in 1939 and the same year won first prize in a contest sponsored by the Berkley Players. She helped Koch compile American Folk Plays , attended his classes, and, in his absence, took over the classes for him. Betty Smith also published seventy-two one-act plays, sold for anything from $10 to $50 apiece "for bread and butter." When radio was set up at The University of North Carolina, she wrote radio plays with Earl Wynn and acted in them and in Playmaker productions. In 1940 she won the Dramatic Guild Award of $1,000. She edited Twenty-five Plays for All-Girl Casts (1942) and Twenty Prize-Winning Plays (1943).

Much of her fiction began life as a play. At Yale she had written a three-act drama, "You Promised Me," based on memories of life in Brooklyn. Now, in a one-room house—all she could afford—on North Street in Chapel Hill, she began to turn this material into a novel. Her house had a chimney in the center. Rising about five-thirty, wrapping an old blanket around her, with her back against the chimney wall to keep warm, she wrote A Tree Grows in Brooklyn . Two weeks after publication by Harper on 17 Aug. 1943, it sold over 150,000 copies and ultimately over six million. In the end, the novel grossed her about $1 million. Twentieth-Century Fox paid $50,000 for movie rights; the movie was directed by her old friend, Elia Kazan. On 22 Apr. 1951 the musical based on Tree opened in New York. The movie won three Academy awards; the musical ran for over a year. The novel was made into a radio serial, appeared later on TV as a "late show," and was the basis for a comic strip in some two hundred papers. It was published in Braille, translated into twenty-two foreign languages, and rewritten in France as a child's book. Banned as "obscene" in Liberty, Ohio, in 1964, it was reinstated, Betty declared, "after I went out to Ohio."

With part of her money, she set up a fund at The University of North Carolina for annual playwriting awards. She also bought "the old Mangum house" at the corner of Rosemary and Hillsborough streets, two Cadillacs, and a cottage at Nags Head, though a few years later a hurricane washed away the cottage and all its furnishings. Three days before the publication of Tree she had married Joseph Piper Jones. They were divorced in December 1951. Shortly thereafter, she married Robert Voris Finch. He died on 4 Feb. 1959, and she never married again.

In 1948 her second novel appeared. Tomorrow Will Be Better , the locale also Brooklyn, did not do so well financially as Tree , though it too was a Book Club selection (as were all her novels) and eventually came out in paperback as well. Betty had articles and stories published in Vogue, Mademoiselle, Good Housekeeping, Harper's, Life , and Collier's and book reviews in the New York Times . In 1958 her third novel, Maggie Now, was published, followed by Joy in the Morning in 1963. In this final novel she shifted to memories of her first marriage and years at the University of Michigan, and here she again hit her stride. Royalties from Joy in 1964 amounted to $50,000 at the same time that those from Tree were still about $6,000 annually. Metro Goldwyn Mayer bought movie rights for $150,000.

Betty Smith was a member of the Authors' League, Dramatists Guild, American Federation of Radio, PEN, Pen and Brush, Matrix, and Theta Sigma Phi. Awards included Mademoiselle magazine's Woman of the Year; the Associated Press's Outstanding Woman of the Year in Literature; Oscar, awarded by Youth United, Inc.; Certificate of Merit from the New York Museum of Science and Industry "for accurate portrayal of contemporary American life in novels"; Carolina Dramatic Association Award; and Playmakers' Alumnae Award. Her portrait hangs in the Yale Drama School Hall of Fame. She was a Democrat and a Roman Catholic.

After she had been moved to a Shelton, Conn., convalescent home following pneumonia, she died in her sleep. A funeral mass was celebrated in St. Thomas More Church, Chapel Hill, with burial in the Chapel Hill Memorial Cemetery.

Orville Prescott, In My Opinion: An Inquiry into the Contemporary Novel (1952)