William Simpson, pharmacist and teacher, was born in New York City, the son of James and Ann Cannon Simpson, both born near Glasgow, Scotland, who had immigrated to the United States in 1837. The family moved to Richmond, Va., in 1844 and later to North Carolina, where the elder Simpson established a bakery first in Warrenton but afterwards in Raleigh. William attended school in Richmond and after moving to Warrenton, he studied pharmacy with a local druggist. At age seventeen, because of the illness of his father, he became the manager of his father's bakery while studying pharmacy in the evening under a local pharmacist named Ferguson. In 1856 he worked for a drug firm in Richmond, but after a year or so he was employed by Meade and Baker, manufacturing pharmacists in New York. He returned to Raleigh in 1860. 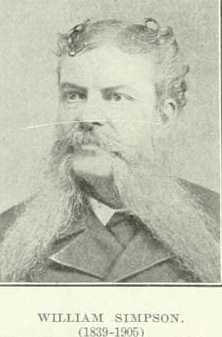 At the outbreak of the Civil War Simpson volunteered for service, and after brief duty with a Virginia regiment he was assigned as a pharmacist to the military hospitals in Raleigh. After the war he became a partner in the firm of Doepp and Jones, Raleigh druggists, and by 1870 had acquired the company. He continued the business until a short while before his death, earning a reputation for his professional service to the community. Simpson was particularly noted for providing medicines to the poor without charge. He patented several medicines and about 1876 published a pamphlet, entitled Make Your Own Fertilizer, in which he instructed farmers how to make fertilizer with ingredients that cost about $10 per ton but provided the nutrients found in commercial brands that cost up to $50. He was one of the judges to award the pharmacy prizes at the Chicago World's Fair of 1893.

In 1880 Simpson was one of the founders of the North Carolina Pharmaceutical Association, and in 1882 he served as president. For a great many years he taught pharmacy, particularly to his own clerks so that they might pass the examination of the State Board of Pharmacy, but because the demand was so great he accepted students from around the state. In 1893 he also became dean of the Leonard School of Pharmacy at Shaw University.

A member and secretary of the newly organized Board of Pharmacy in the state, he was also secretary-treasurer of the board from 1881 to 1902 and one of the examiners until his death. In addition, he was a member of the American Pharmaceutical Association and president in 1894.

In 1860 Simpson married Anne Cannon Shanks, of Richmond, whose family had arrived from Scotland at the same time as his. They were the parents of eight children, only two of whom survived: Jane (Mrs. Charles McKimmon) and Thomas Skinner. William Simpson died in Raleigh. He had been an active Mason, and his funeral was held at the First Baptist Church with Masonic honors.