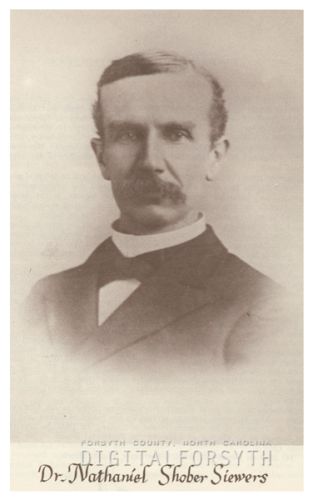 Nathaniel Shober Siewers, physician and lay officer of the Protestant Moravian church, was born in Salem, the son of John Daniel and Rebecca Shober Siewers. His grandparents, Henry Frederick and Dorothea Wrang Siewers, traveled as Moravian missionaries in 1797 from Herrnhut, Germany, to the Danish West Indies. Nathaniel Siewers attended the Salem Boys School and Nazareth Hall, Nazareth, Pa. On 1 Nov. 1863 he went to Orange County, Va., to enlist in the Confederate army. As a private in the First Battalion, Company B, North Carolina Sharpshooters, he was detailed "as a musician" in the Twenty-first Regiment Band. His battalion joined in Robert E. Lee's surrender at Appomattox Court House on 9 Apr. 1865.

In 1865, after "reading" medicine with Dr. Theodore F. Keehln, Siewers entered the Medical School of the University of Pennsylvania. He was graduated in 1867. Eager to obtain additional training in the European clinics, he studied at the medical centers of the Universities of Berlin, Prague, and Vienna. From Vienna in October 1868 he wrote: "There is, to my mind, no profession outside of the ministry, the conscientious pursuit of which carries with it greater blessing than does that of medicine." In this spirit of dedication and with a keen awareness of his responsibility, he extended his medical study abroad through the second year to take advantage of the specialized departments of medicine then being established in Europe.

In 1869 Siewers returned to Salem to practice medicine. On 5 Oct. 1875 he married Eleanor Elizabeth de Schweinitz, the daughter of Bishop Emil de Schweinitz, a lineal descendant of Count Nicholas Louis von Zinzendorf, benefactor and "father" of the Renewed Moravian church in Herrnhut, Germany. Dr. and Mrs. Siewers had seven children—Pauline, Charles Shober, Agnes Gertrude, Ralph de Schweinitz, Ruth Eleanor, Walter Ledoux, and Grace Louise. In 1893, near the gate to what was once Cedar Avenue in Salem, Siewers built the stately gray-stone Cedarhyrst for both a residence and an office.

Siewers considered medicine to be "standing at the portals" of its potentiality; he predicted organ transplants in human beings. He was considered an excellent surgeon and is believed to have been the first in the area to perform an appendectomy. In addition, he was one of the promoters and builders of the Roanoke and Southern Railroad and among the organizers of the Wachovia Loan and Trust Company.

Bishop Edward Rondthaler characterized him as "quiet but earnest and deeply interested in the work of his church." Siewers served on the board of elders and the board of trustees of the Home Moravian Church. In 1890 he was elected a provincial elder, the first layman to fill such an office in the Moravian Unity. His last honor was that of being chosen to represent the Southern Moravian Unity at its worldwide synod in Herrnhut, Germany, in 1899, but ill health prevented him from attending. After a long illness, Siewers died at age fifty-six. He was buried in God's Acre, the Moravian graveyard, in Salem. In the University of Pennsylvania Register was this tribute: "His energy and faithfulness in his profession was [sic ] exemplary, while his skill as a physician placed him in the front ranks as a practitioner in the South, and his practice for many years was large and covered a wide area of the country."