John Francis Shaffner, Civil War surgeon and leader in civic, business, and medical affairs, was born in Salem, the son of Henry and Lavinia Hauser Shaffner. Baptized and confirmed in the Moravian church, he was affiliated with the Salem congregation for the remainder of his life. Shaffner was educated in the Moravian schools of Salem, by private tutors (most notably, William Meinung), and at The University of North Carolina. He attended Jefferson Medical College, in Philadelphia, from which he was graduated on 14 Mar. 1860. 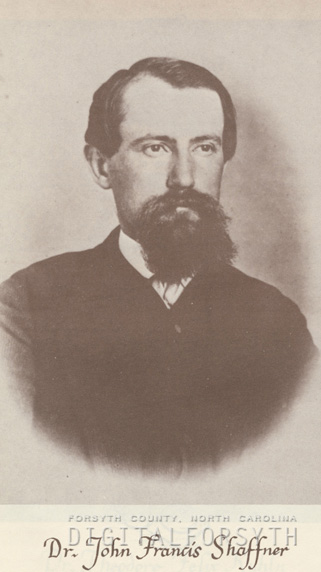 His private medical practice, which he had begun in Salem, was interrupted in 1861 when he volunteered as a private in Company A (later Company D), under Captain A. H. Belo, Twenty-first Regiment, North Carolina Troops. For a time he was an assistant surgeon with the Seventh, Twenty-first, and Thirty-third regiments. Promoted to surgeon in the Confederate army in March 1862, he served in the field with the Fourth and Thirty-third regiments and as brigade surgeon of Lawrence O'B. Branch's and Stephen D. Ramseur's brigades until the surrender of General Robert E. Lee's army at Appomattox Court House, Va., on 9 Apr. 1865. A chronicler of the Fourth Regiment wrote: "Chief Surgeon J. F. Shaffner was a man of splendid ability; a man of education and fine attainments, and always faithful to the important tasks committed to him." And in the chronicle of the Thirty-third Regiment it was written: "Our surgeons, Doctors J. F. Shaffner and John A. Vigal, were the kindest and best of men. They were ideal surgeons—capable, honest, firm, sympathetic, self-sacrificing, courageous and unremitting in their attentions to the sick and wounded, oftentimes exposing themselves to imminent peril in the discharge of their official duties. By such unflinching heroism and devotion to duty they won the gratitude of the entire command."

In a letter dated 27 May 1862, Shaffner wrote an enlightening comment about his own situation: "Surgeons are in ever-growing danger of becoming too abstract—of losing sympathy with passing emotions and sufferings, and particularly with those shared by numbers. The danger is, lest we forget, we too are mortal, . . . because now, at present, we do not feel the pains, the agonies, of the poor sufferers in our charge."

Shaffner's wartime experiences included his capture by enemy troops while attending the wounded of his regiment who had necessarily been left behind. His friendships formed in the army remained strong for the remainder of his life, and for years he maintained an active interest in the affairs of the Confederate veterans, himself a charter member of the Norfleet Camp, United Confederate Veterans.

On 16 Feb. 1865 he married Caroline Louisa Fries, a native of Salem and the daughter of Francis and Lisetta Vogler Fries. The couple had five children: Henry, William, Caroline, John F., Jr., and one who died in infancy.

From 1878 to 1884 he was first commissioner and then mayor of the town of Salem. He took an active part in the organization of the North Western North Carolina Railroad, of which he was elected a director in 1870. Shaffner was the first president of the Salem Water Supply Company, which later was transferred to the town of Salem, and a founding member, vice-president, and director of the Winston-Salem Building and Loan Association. He served as a board member of the Salem Boys' School for several terms, was a trustee of the Salem congregation from 1878 to 1890, and was a member of the financial board of the Southern Province for several years.

Shaffner was buried in Salem Cemetery. The concluding prayer at the funeral service was offered by his life-long friend and chaplain of the United Confederate Veterans, Dr. H. A. Brown.