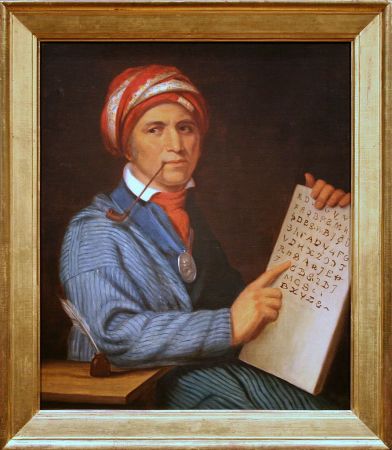 Sequoyah, inventor of Cherokee syllabary, was born in the Indian town of Taskigi, Tenn., then western North Carolina. His father probably was Nathaniel Gist, a trader who abandoned his mother, a woman of mixed Indian blood, before the birth of the child. He grew to manhood ignorant of the Indian language and engaged in hunting and fur trading until crippled by an accident. Increased contacts with white people led him to ponder over their "talking leaves," and he resolved to master the secret and apply it to the benefit of the Indians. By 1821, despite ridicule, he had completed a table of eighty-five or eighty-six syllables in the Cherokee language.

A council of chiefs approved his work, and thousands of Indians learned to read and write. In 1822 he visited the western Cherokee, gave them his syllabary, and made his home with them. His invention stimulated the printing of books and a newspaper, Cherokee Phoenix, in the Indian language. Sequoyah was active in the political life of the tribe and in 1828 visited Washington, D.C., as an envoy. In 1841 the Cherokee National Council voted him an allowance and two years later an annuity of $300, which was continued to his widow. Early in 1843 he began a journey in search of a band of Cherokee said to have moved to the region west of the Mississippi, and he died in Mexico in the fall of that year. According to one account, he had five wives and twenty or more children. His is commemorated by a California redwood tree called Sequoyah and a statue in Washington, D.C.