Isaiah Sellers, Mississippi River pilot, was born in Iredell County but for unknown reasons departed for the West as a young man. Sometime during the early 1820s he reached the Mississippi River, where he established his fortune and reputation. Sellers received his river baptismal by working on keel boats on the Ohio River–to–New Orleans run. By February 1825, however, he had shipped on board a steamboat, the Rambler out of Florence, Ala., and acquired the skills of a riverboat pilot. He next served on the General Carroll, operating between Nashville and New Orleans. On the General Carroll Sellers replaced the unreliable practice of shouted commands for soundings with the bell-tap, a system that improved river safety by ensuring that crewmen would hear the pilot's command to "heave the load." As steamboats increased in size, the practice of bell-tapping, generally ascribed to Sellers, became standard. After a brief tenure on the President in 1827, Sellers commenced his career in the upriver St. Louis trade as pilot of the Jubilee. In 1836 he helped construct and piloted the 400-ton steamboat Prairie out of Pittsburgh. The Prairie earned the distinction of being the first steamboat with a stateroom cabin to touch at St. Louis. 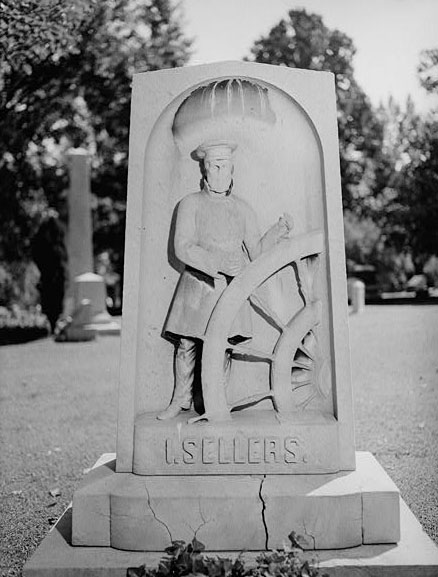 From the mid-1830s until his death, Sellers traded between his adopted home of St. Louis and New Orleans. One contemporary account credits him with 460 roundtrip runs. Remarkably, Sellers "never sank a steamboat" or experienced a serious accident as a riverboat pilot. During a time when steamboats regularly foundered on snags and rocks in the river and suffered collisions and boiler explosions, his safety record was unsurpassed. The Aleck Scott, a vessel he partly owned and piloted for many years, became the favorite of both the commercial and traveling public. Sellers's success largely owed to his mastery of navigational skills, his long acquaintance with the river's patterns, his habit of recording river information in his diary for reference, and, doubtless, his legendary gift of memory. More important, he persisted in his experiments to increase river safety. In 1857, for example, he regularized the signals for meeting steamboats and so avoid collisions. In his emphasis on river safety, however, he did not sacrifice speed. In 1844, during the maiden season of the wooden sidewheeler J. M. White, II, he and copilot Nathan Way accomplished a record run of less than four days from New Orleans to St. Louis. This mark stood for a quarter of a century.

"Strictly a gentleman of the old school," Sellers maintained a staid, almost "stately," deportment that belied his good humor and fondness for company. He frequently entertained passengers with "rehearsals of his experiences as a boatman" and the history of the river. At least one contemporary found his reminiscences "amusing and instructive." Certainly, he did not lack for friends. But his sober bearing and lapses into self-inflating ramblings on the exploits of the rivermen exposed him to ridicule. Another river pilot, Samuel Langhorne Clemens, once subjected Sellers to a cruel burlesque as "Sergeant Fathom" (1859); later, in his Life on the Mississippi (1883), he devoted a chapter to limning an amusing, although inaccurate and sometimes farfetched, vignette of the benevolent "patriarch" of the rivermen. Clemens's attention to Sellers led him to insist that he adopted his pseudonym Mark Twain from Sellers, who, according to Clemens, contributed articles under that signature to New Orleans newspapers. Serious students of American literature dismiss this story as another of Clemens's fabrications. No articles signed Mark Twain appeared in any New Orleans newspapers for the period, and the few entries Sellers did publish under his own name consisted of bland, "rather routine river data" for the enlightenment of other pilots. Sellers evidenced no literary pretensions or aspirations. Indeed, his contemporaries knew him as a man of only "limited education" at best, and Sellers's manuscript logbook, since destroyed by fire, apparently revealed a tortured prose and wretched spelling, which raises the question of his capacity to write essays for newspaper publication. It is small wonder that editors of the papers that received his river intelligence labored hard to hammer his scribblings into a form intelligible to readers. Still, the Clemens account, which enjoys wide popular acceptance, when mixed with Sellers's real accomplishments, continues to assure Sellers's place as a folk hero along the Mississippi River.

After a "short illness," probably pneumonia, Sellers died. Before his death he had commissioned a bust, cut in sandstone, which today stands over his grave in the Bellefontaine Cemetery, St. Louis. He was survived by a nephew, for his wife Amanda, about whom nothing is known, died without issue twenty years earlier.