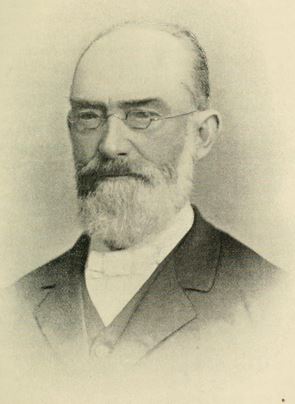 Robert William de Schweinitz, Moravian minister and educator, was born in Salem, the son of the Reverend Lewis David and Louisa Amelia von Schweinitz. Though the father used the German form "von," his sons, including Robert, adopted the Latinized scholarly form "de." Robert was a great-great-grandson of Count Nicholas von Zinzendorf and the brother of Emil Adolphus de Schweinitz, principal of Salem Female Academy (1848–53).

In 1821 the family moved to Bethlehem, Pa., where Robert received his education. He entered Nazareth Hall in 1830 and was graduated from Moravian College and Theological Seminary in 1839. After teaching at Nazareth Hall for several years, Schweinitz traveled to Europe, where he met Marie Louise von Tschirschky; they were married in Herrnhut, Saxony, in 1846. The couple had six children: Helen Louise, Louis Alexander, Clara Amelia, Lucy Bertha, Robert Edmund, and Paul Robert.

Following his return to Bethlehem, Schweinitz was ordained deacon on 24 Oct. 1847. He was elevated to the post of professor at the Theological Seminary and subsequently appointed pastor of the Moravian congregations in Graceham, Md., and, later, Lancaster, Pa.

When Emil Adolphus, Robert's brother, was promoted from his position as principal of Salem Female Academy in 1853, Robert was appointed to replace him. Robert immediately determined to replace the academy's aging Gemein Haus and in 1854, with plans drawn up by Schweinitz and Francis L. Fries, the cornerstone of the new Main House was laid on the site of the demolished Gemein Haus. Later improvements to the campus included the construction of a new chapel. During this time, on 13 May 1856, Schweinitz was ordained a presbyter.

Under Robert's leadership, the academy grew swiftly. In 1857, 152 new names were added to the roster, for a total of 370 students in the following year. The onset of the Civil War provided added impetus to this growth, which Adelaide L. Fries has attributed to the idea of protecting young ladies in a peaceful Moravian town. Even the end of hostilities had no effect on this growth, for in 1866 another 152 new names were added to the roll.

In May 1866 Schweinitz left his post to become principal of Nazareth Hall. This position was short-lived, however. In 1867 he was elected president of the Society of the United Brethren for Propagating the Gospel among the Heathen, which he led until 1878. In 1881 he became treasurer of the society and served until 1899. From 1885 to 1890 Schweinitz made numerous trips to Washington, D.C., to negotiate with the government on Moravian missions to the Eskimos in Alaska. This was in conjunction with his post as mission agent of the Moravian Church in America, in which capacity he served from 1885 to 1898. Failing health resulting from Bright's Disease and increasing blindness, which ultimately became total, finally forced his retirement. He died at Bethlehem and was buried in the Old Moravian Cemetery.

"A history of Bethlehem, Pennsylvania, 1741-1892 : with some account of its founders and their early activity in America." Lehigh University Digital Library: http://digital.lib.lehigh.edu/cdm4/beyond_viewer.php?CISOPTR=10685&ptr=10731&searchworks=cat20