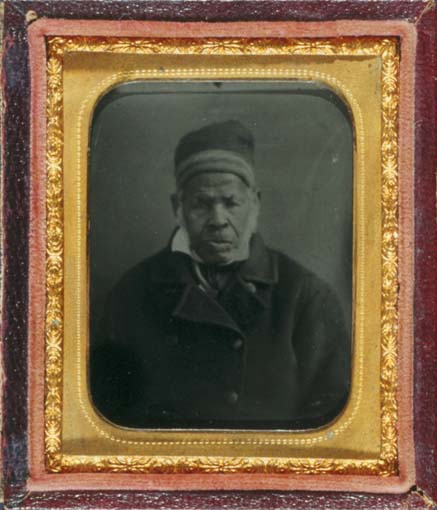 Omar Ibn Said, an Islamic scholar, was born in Futa Toro (now a part of Senegal) to a wealthy Muslim family before being enslaved in the United States and eventually North Carolina. Said was well educated in Quranic schools, studying arithmetic, business and theology alongside religious leaders including his brother for twenty five years. In addition to his studies, he worked as a teacher and tradesman. He purportedly made a pilgrimage to Mecca between 1790 and 1805.

In 1807, at nearly 40 years old, Said was captured, enslaved, and forced to migrate to Charleston, S.C. He was among the last African people to be trafficked through the Trans-Atlantic Slave Trade before the outlawing of the overseas slave trade at the end of 1807.

Said was enslaved for two years in Charleston and on a South Carolina rice plantation by a man called Johnson, who Said described as "small, weak, and wicked" with "no fear of God at all." In 1810, he escaped and made his way to Fayetteville. Near Fayetteville, Said visited a Christian church to pray. After being seen in the church, he was captured and imprisoned for sixteen days. When efforts to locate his enslaver proved unsuccessful, Said was claimed as property by General James Owen of Bladen County.

It was at James Owen's Cape Fear River estate called Milton that Said learned English and was said to have converted to the Christian religion. Owen, intrigued by Said's fluency with Arabic and his high level of education, gave Said an Arabic translation of the Bible in 1819. Said joined the First Presbyterian Church in Fayetteville in 1820. Modern scholars hold that Omar Ibn Said remained a devout Muslim for the entirety of his life.

In 1831, he completed his autobiography titled "The Life of Omar Ibn Said." This narrative is thought to be the only autobiography written in Arabic by an enslaved person in the United States.

In 1836, the Owen family moved to Wilmington and took Said with them.  There are reports that he accompanied his enslavers to resort springs in the South and there entertained children with folk stories. An added source of public interest in the 1850s was Omar's advanced age.

During the Civil War the Owen family moved to Owen Hill, a Cape Fear farm formerly the home of General Owen's brother, Governor John Owen. Said died at Owen Hill at the age of ninety-four.

Modern scholars now refute that Said was sold by the Fulas after committing a crime and instead hold that Said was kidnapped from his homeland in present-day Senegal. There is also much debate as to whether or not Said converted to Christianity. 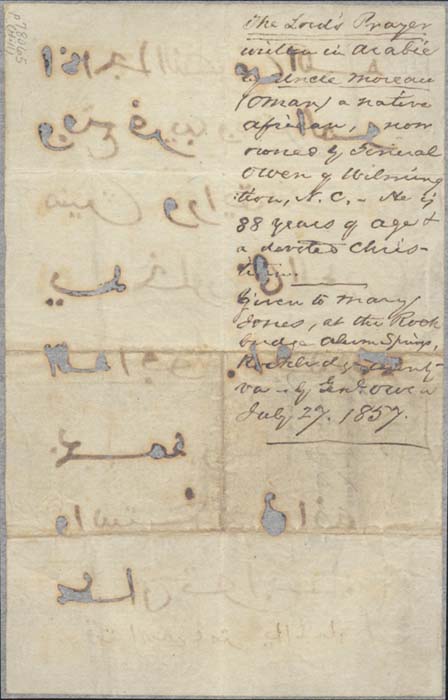 "The Lord's Prayer written in Arabic by Uncle Moreau (Omar) a native African, now owned by General Owen of Wilmington N.C. . He is 88 years of age & a devoted Christian.  Given to Mary Jones, at the Rockbridge Alum Springs, Rockbridge Country Va. by Genl Owen July 27, 1857." Documenting the American South, University of North Carolina at Chapel Hill. https://docsouth.unc.edu/nc/omarsaid/support3.html (accessed March 14, 2012).