Charles Phillips Russell, teacher, author, and newspaperman, was born in Rockingham, the son of Moses H. and Lucy Plummer Phillips Russell. He was graduated in 1904 from The University of North Carolina, where he was editor of The Tar Heel, the student newspaper, and one of the founders of the Golden Fleece, an honorary society. After graduation he worked on the Charlotte Observer, New York Times, New York Herald Tribune, Philadelphia Evening Press, and London Daily Express. While in London he also handled publicity for prizefighter Jack Dempsey. 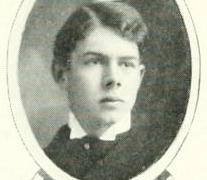 In 1931 Russell returned to Chapel Hill to teach creative writing at The University of North Carolina for the next twenty-five years, first in the English Department and then in the School of Journalism. His students included many future American authors. The Atlantic Monthly described his class, often held outdoors under the trees, as one of the four best in the United States. One of his writing precepts, his students often recalled, was to "Bring on the Bear" (get the action started); when he retired from teaching, his former students presented him with a huge white bearskin rug.

He also wrote a weekly book review column, "The Literary Lantern," and a column of nature notes, "Carolina Calendar." For a time he edited a local newspaper, the Chapel Hill News Leader.

His numerous books ranged from an early travel account of Mexico and the Yucatan, Red Tiger (1925), and one novel, Fumbler (1928), to such highly regarded biographies as Benjamin Franklin: First Civilized American (1926), John Paul Jones: Man of Action (1927), Emerson: The Wisest American (1929), William the Conqueror (1934), and Jefferson: Champion of the Free Mind (1956). His book about his great-aunt Cornelia Phillips Spencer, The Woman Who Rang the Bell (1949), received the North Carolina Mayflower Award, and in 1968 he received the North Carolina Award "for his creative work in writing and teaching others to write." Russell was the first president of the North Carolina Society of County and Local Historians and the author of a book of history, North Carolina in the Revolutionary War (1965). His last book was These Old Stone Walls (1972), a collection of stories and historical anecdotes about Chapel Hill, where he had lived and taught for many years.

In 1931 Russell married Caro Mae Green, of Chapel Hill, sister of playwright Paul Green. He was survived by two daughters, Claire Russell Shaffner of Charlotte and Avery of New York City, and one son, Leon.